We had one night and morning in Bangkok before going to Phuket, and made the most of it by wandering around the Siam Square area and trying everything we came across. I hate to admit, but we actually screwed up to begin with. We were in the malls looking for cufflinks and decided to eat at the food court in the mall. Now usually food courts are quite good in malls in Asia so we had high expectations. Unfortunately, the flavors were bland and a pork dish we ordered was even smothered in some sort of crazy palm sugar sauce, so we quickly left and hit the streets…

We started at a streetside restaurant that was filled with locals and ordered the mango salad with salted egg, a spicy pork dish, and a couple of beers to wash it all down. Now here were the flavors we were looking for. The mango salad was sweet, sour, spicy and salty, and the bits of salted egg made your mouth pucker a bit. The spicy pork was, as advertised, spicy. In fact the woman taking our order said, ‘Oh you want spicy?’ and we said, ‘Yes!’. She smiled and walked away, probably thinking these crazy farang are in for a surprise. And it sure was spicy… It was the building kind of spicy too, so the first few bites you’re like, oh this is OK… and then your lips start to burn and you realize it’s just not going away, and then you reach for a drink to quench the burn but all you have is beer, which helps for about 2 seconds and then makes it worse. But it was manageable and the flavors were good – the chili didn’t overwhelm the other flavors (salty, a hint of sour). 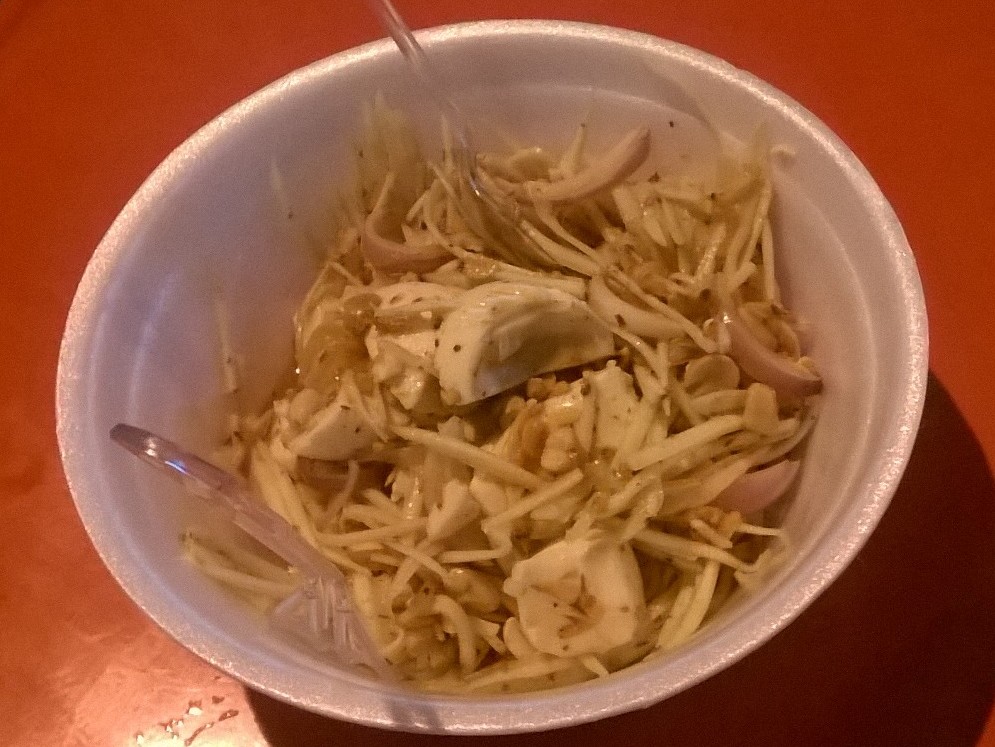 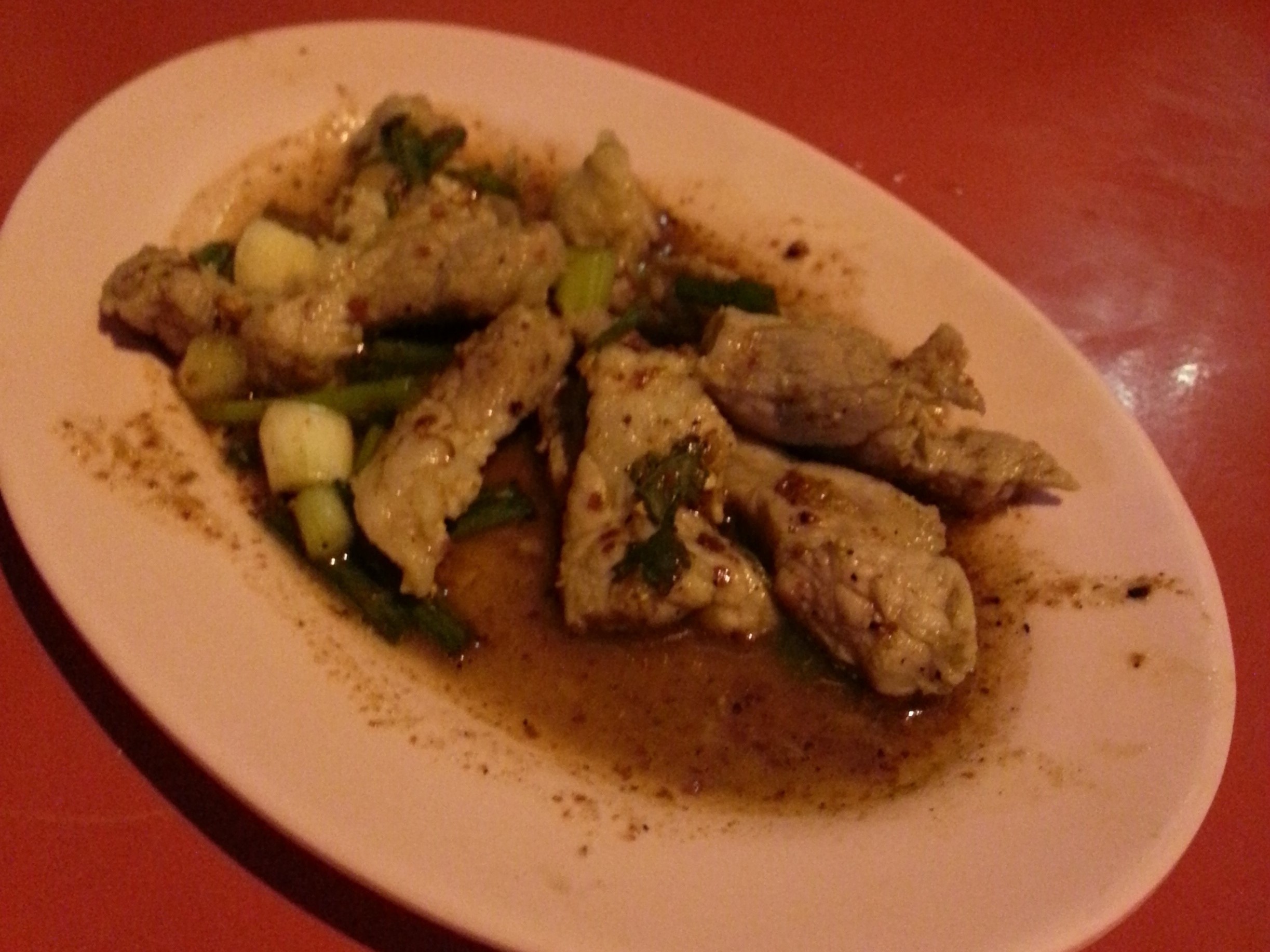 After the burning had ceased we were ready for the next thing: meat on a stick. We had some pork, some chicken, and chicken butt. What what chicken butt? The meat had a glazed, sweet and salty bbq sauce on it. You can’t go wrong with meat on a stick. Next up was fried chicken! It looked good so we had to have some. The skin was crispy and salty and the meat juicy – awesome fried chicken! 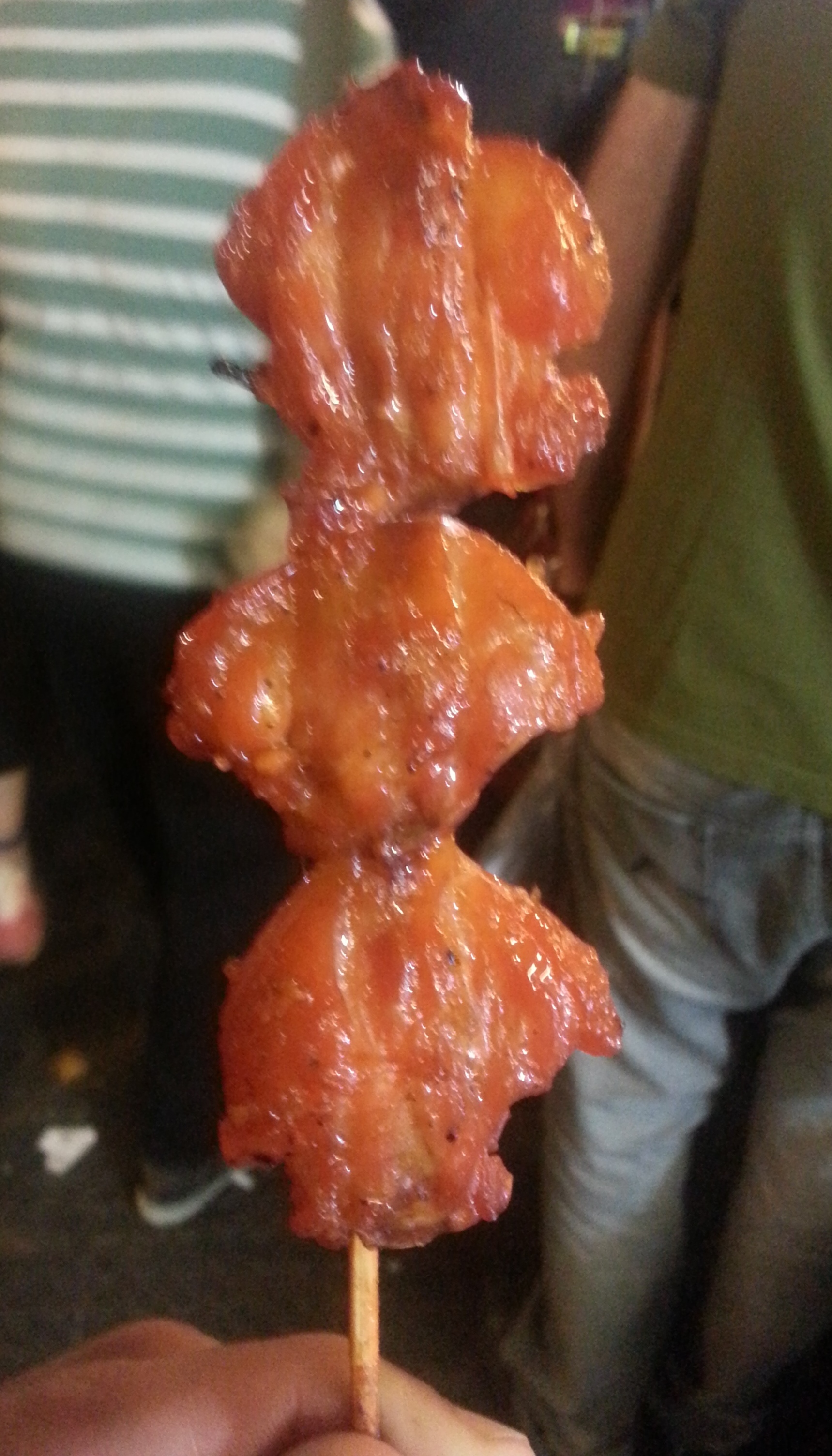 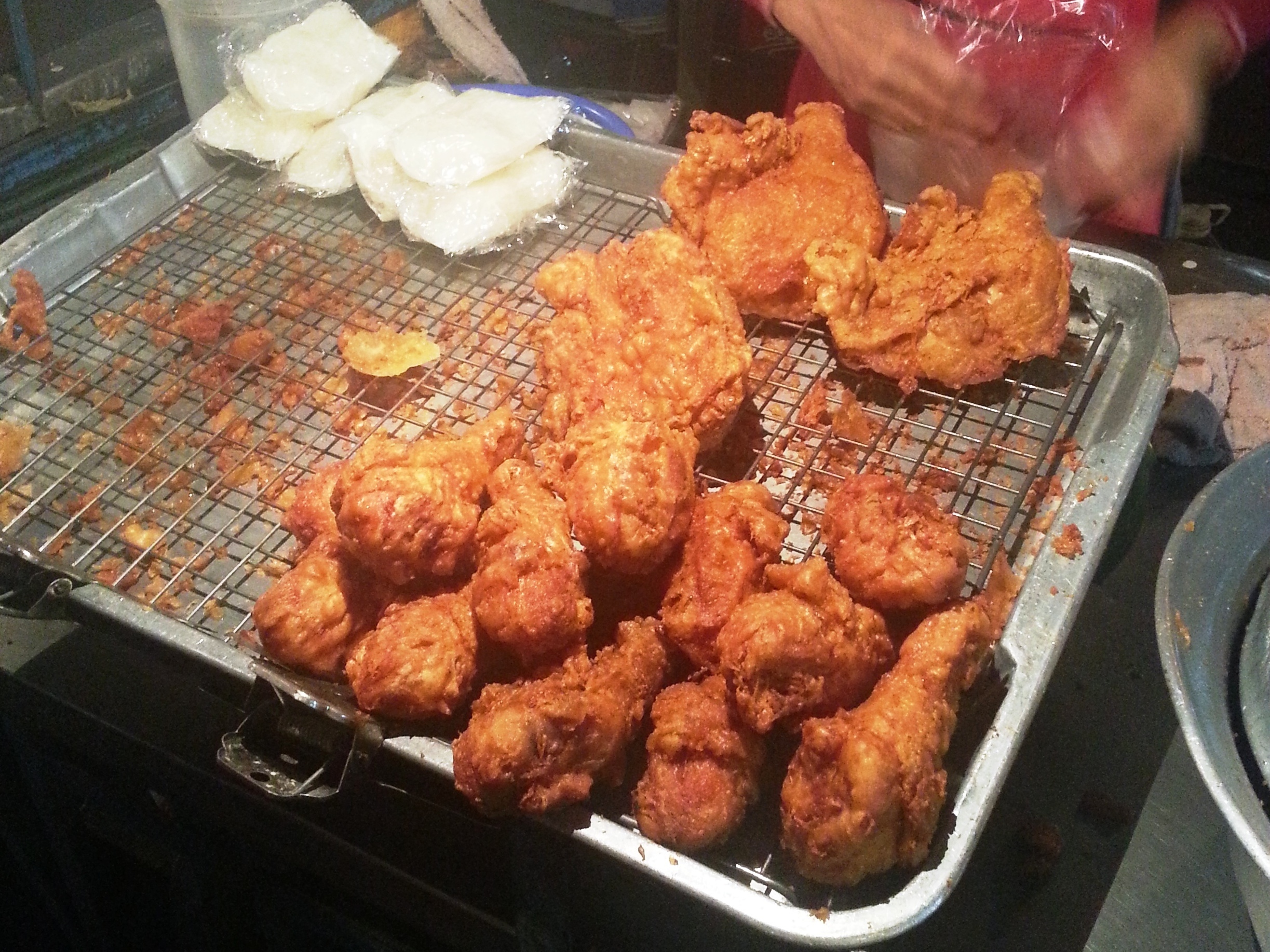 Right next door was man selling assorted seafood wrapped in banana leaf. The man selling it gave us the option of fish that is spicy, or shrimp that is not. We chose fish and were once again met with a grin… The flavor of the banana leaf had infused into the fish, there was chili (of course), and kaffir lime leaf. Very enjoyable! We called it a night and continued the adventure the next morning… 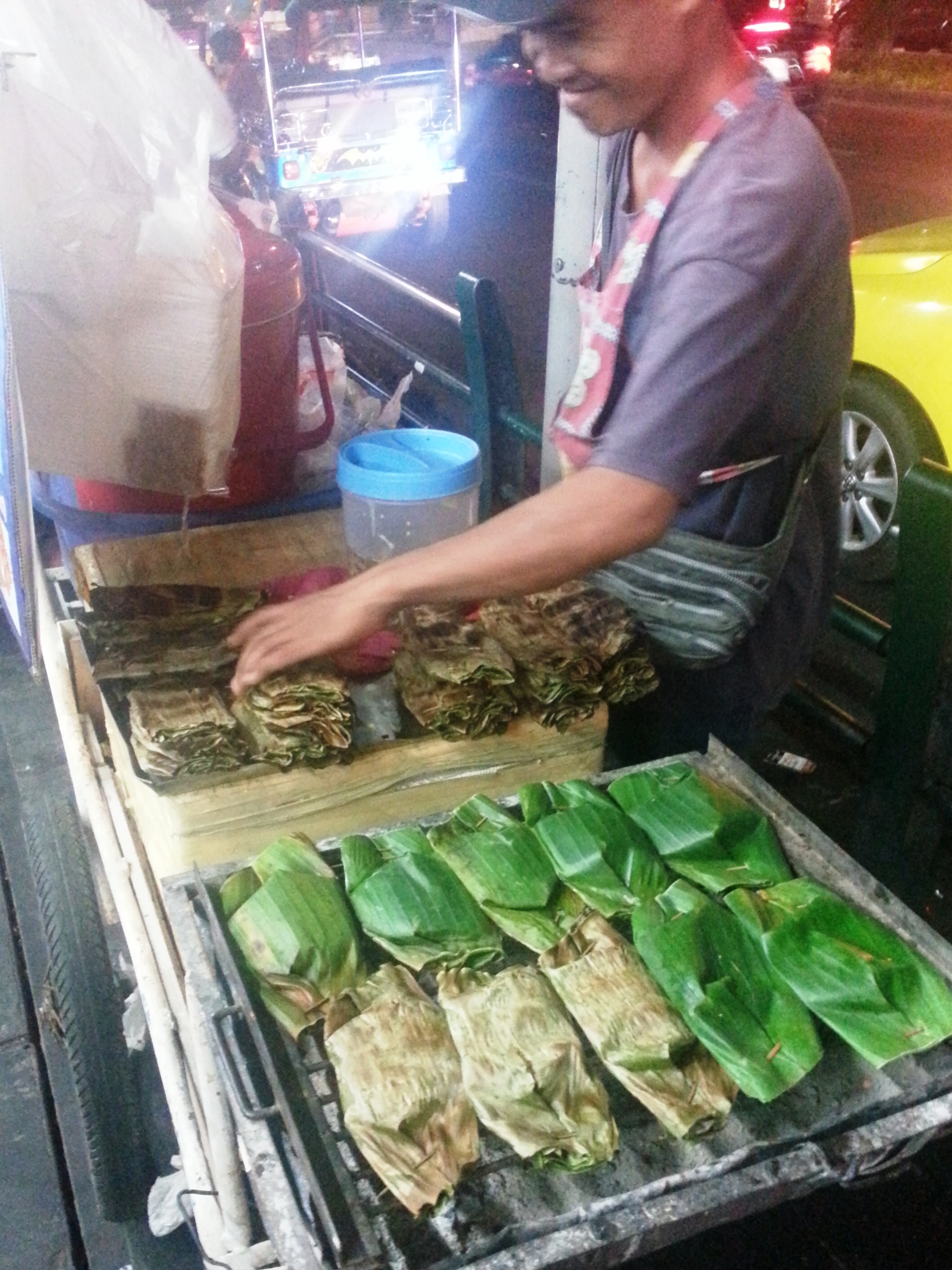 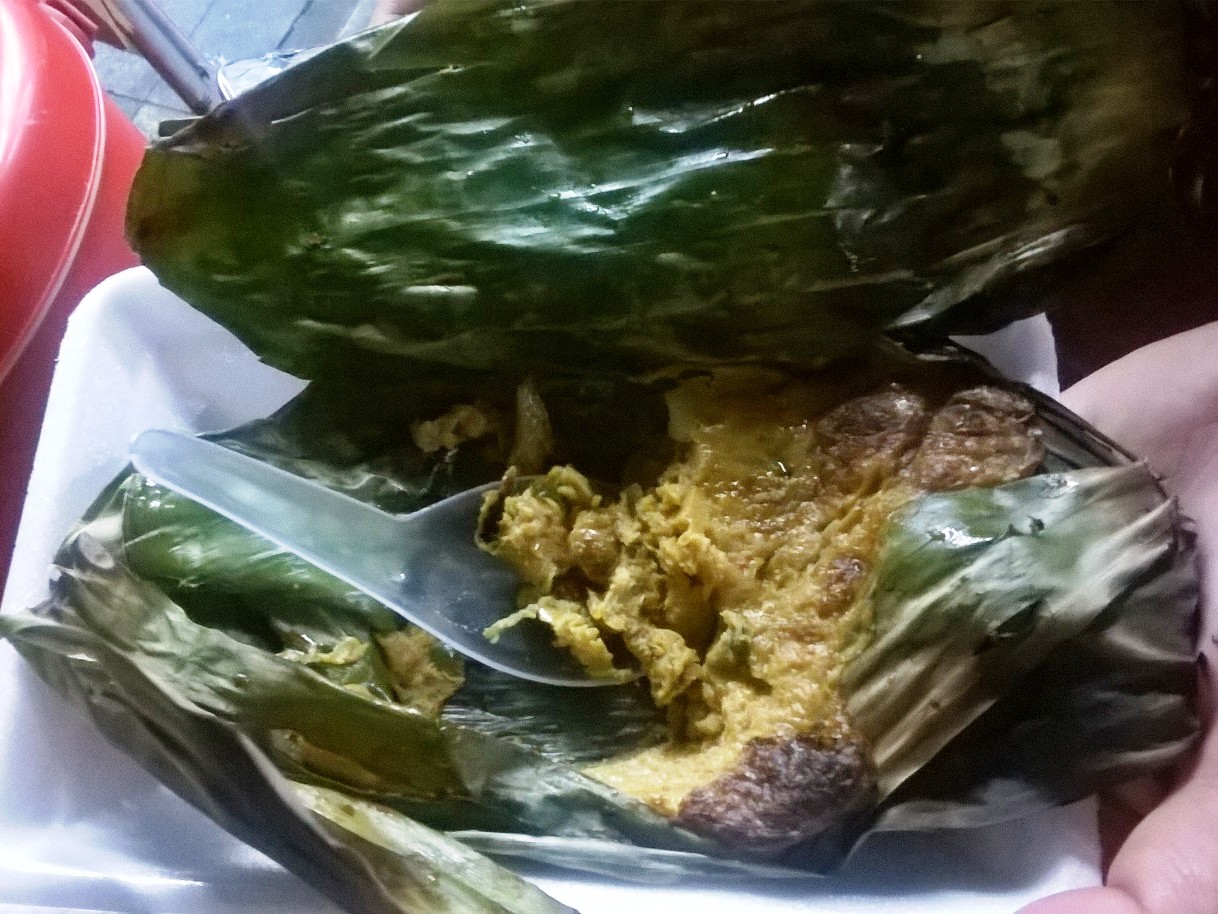 We woke up and headed out to find some breakfast. First thing we encountered was sticky rice wrapped in banana leaf. There were two kinds on display, white and purple sticky rice. We asked for the white one, but she had run out, so we went for the purple stuff. We weren’t sure if it would be sweet or savory, turns out, it was sweet. There was a streak of white through it made of coconut milk and some sort of ground bean (perhaps mung bean). It wasn’t overly sweet and was a good start to our breakfast. 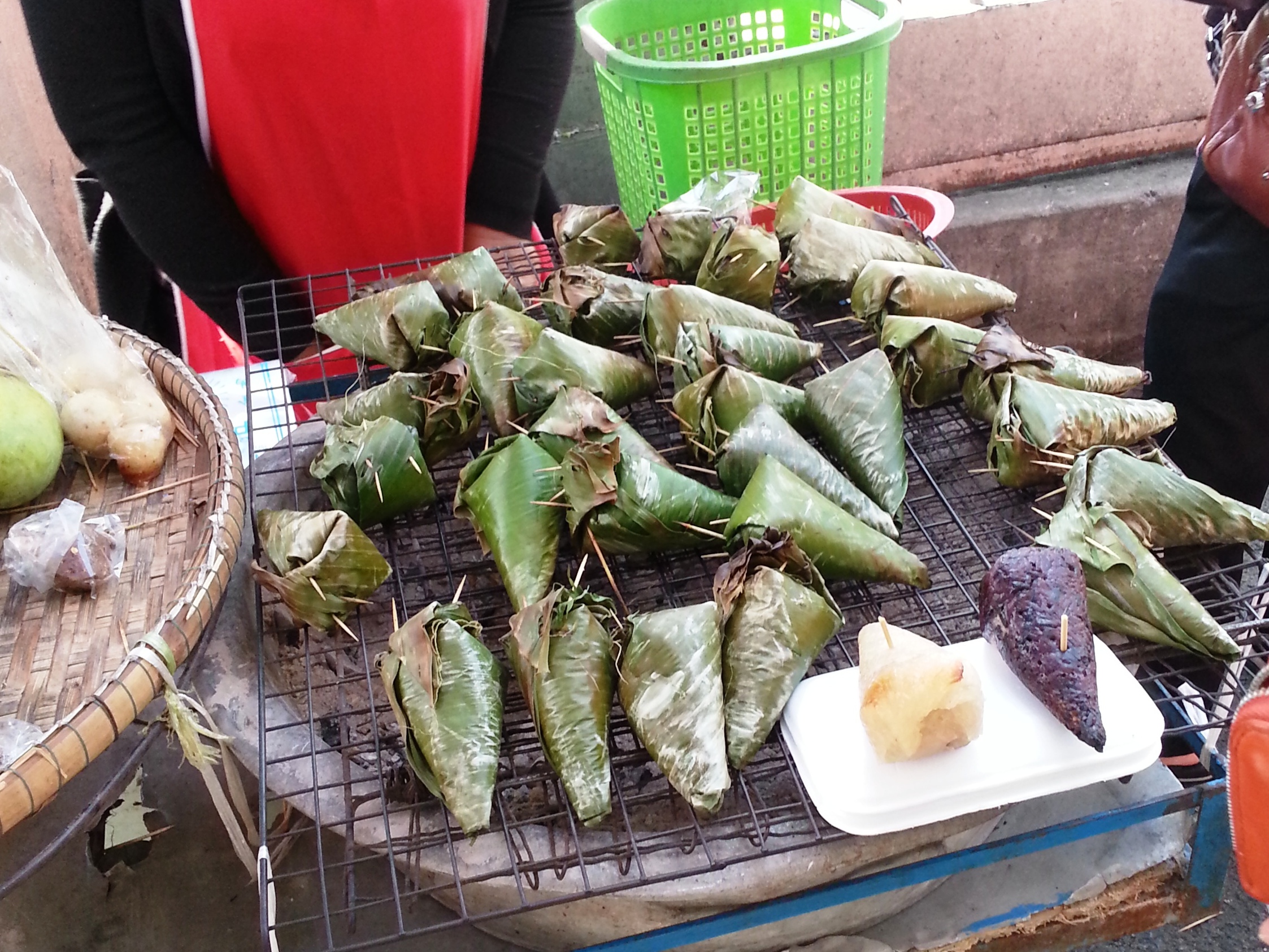 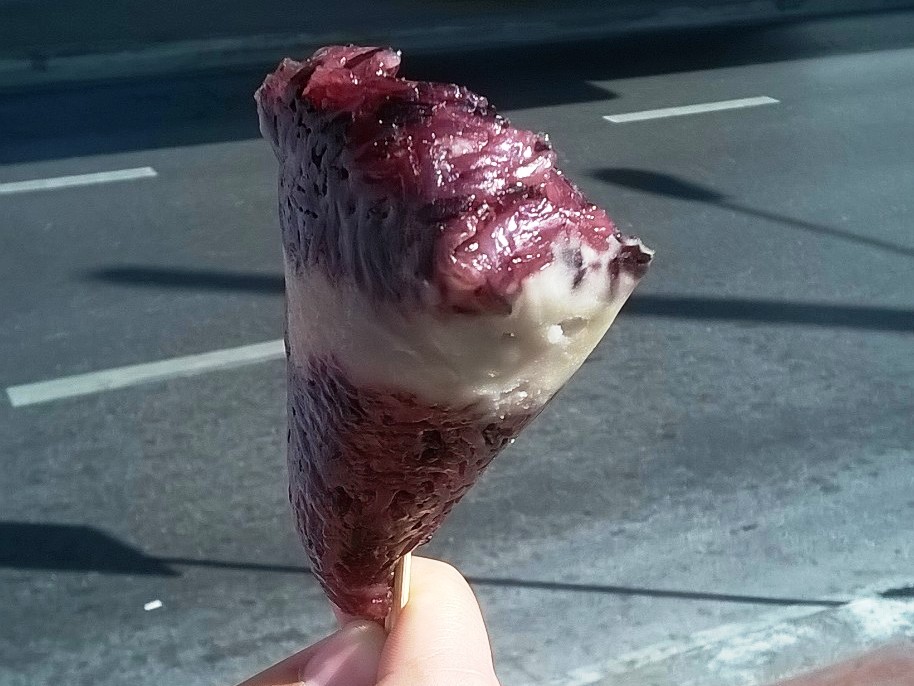 The night before we had walked by some sausages and Pano was regretting not having any, so when we walked by again in the morning and they were open, we bought a sausage. It was probably chicken meat and had a lot of white pepper in it. It was very, very salty and though slightly shocking at first, the flavor was good after a few bites. 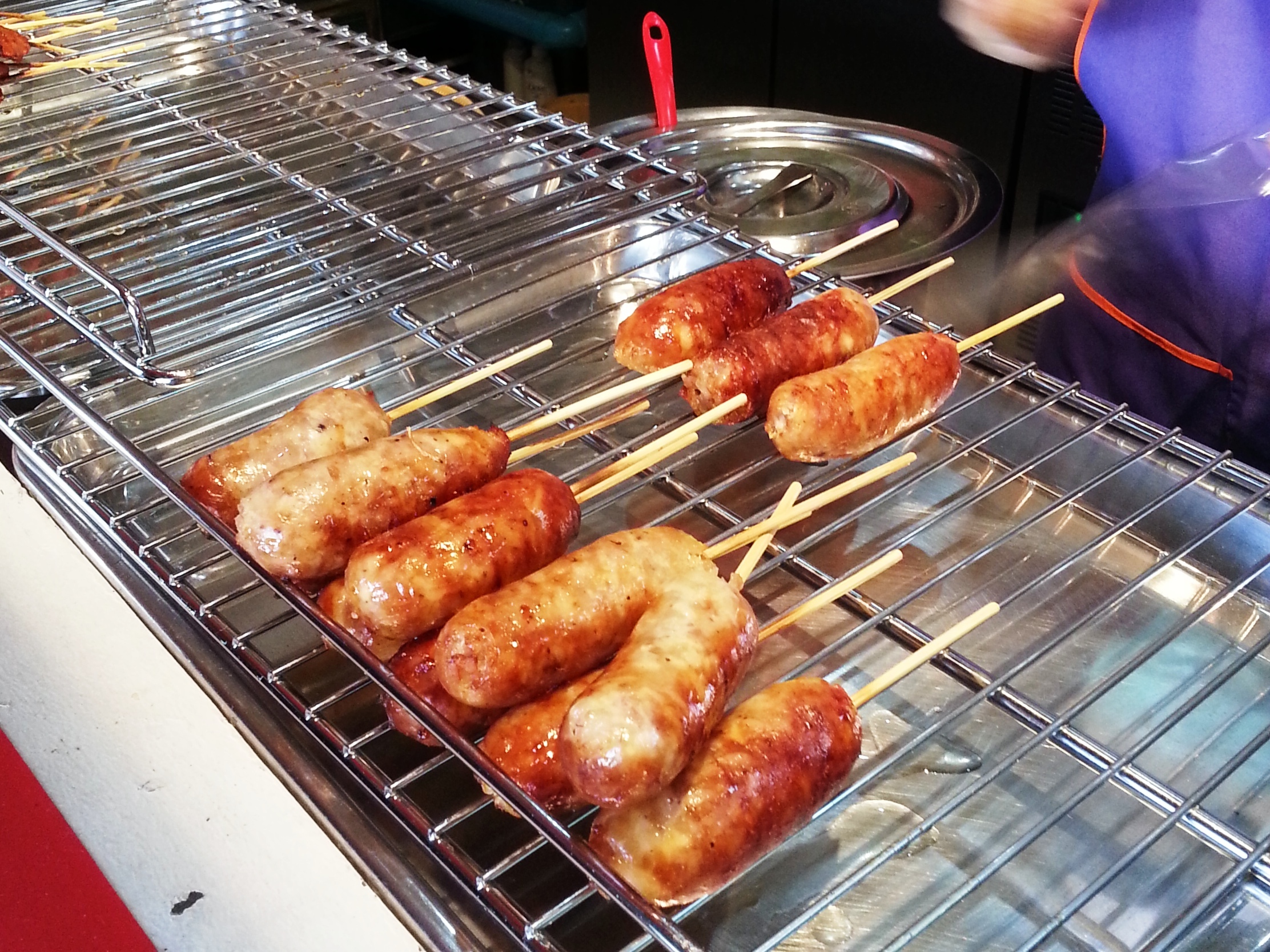 We turned off the main road and saw an alley called Food Plus. It was a tiny alley with food stalls on the side and tables in the middle, and it was packed with locals having their breakfast. We walked in and after looking around decided on the pad thai and pad see ew. Both were excellent. We were satiated and ready to go to Phuket. We wished we had more time in Bangkok, but thankfully, a second layover on the way back to Holland meant we could try some more street food… Read about it in the next post! 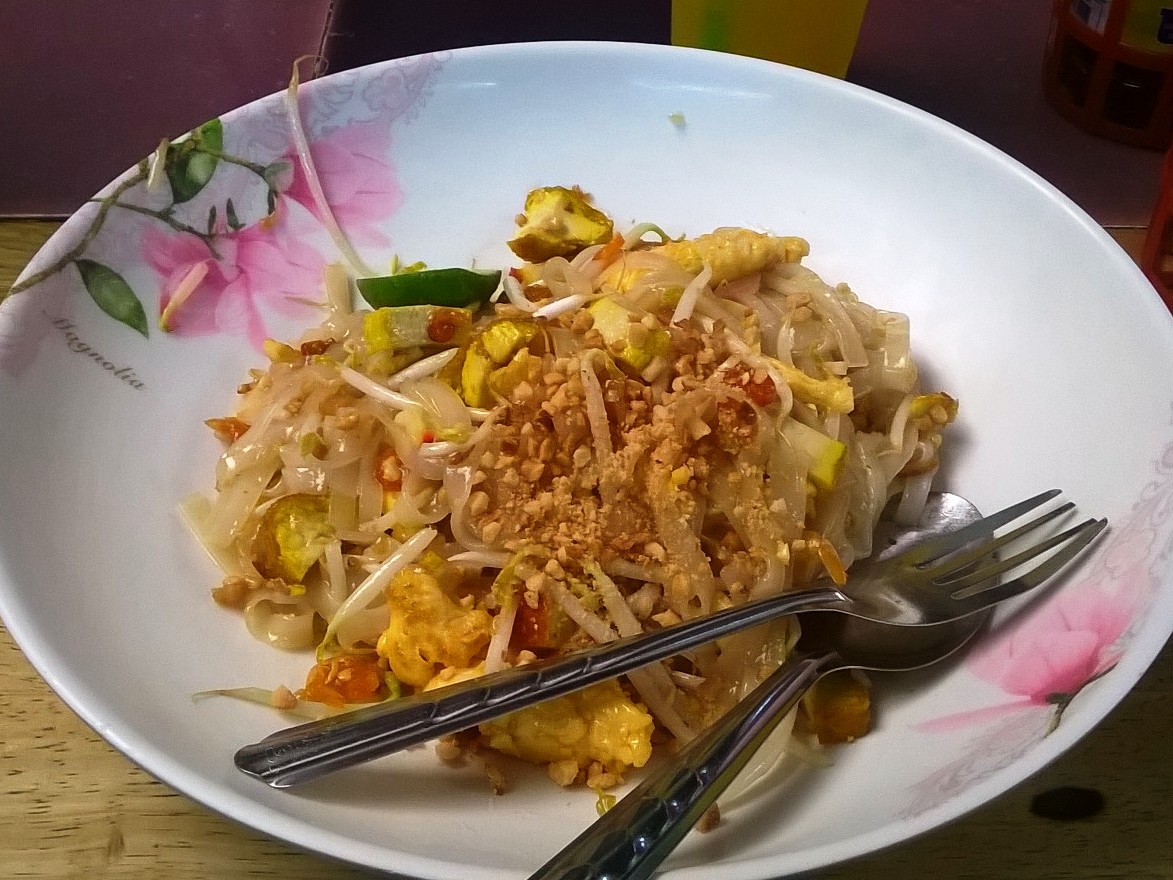 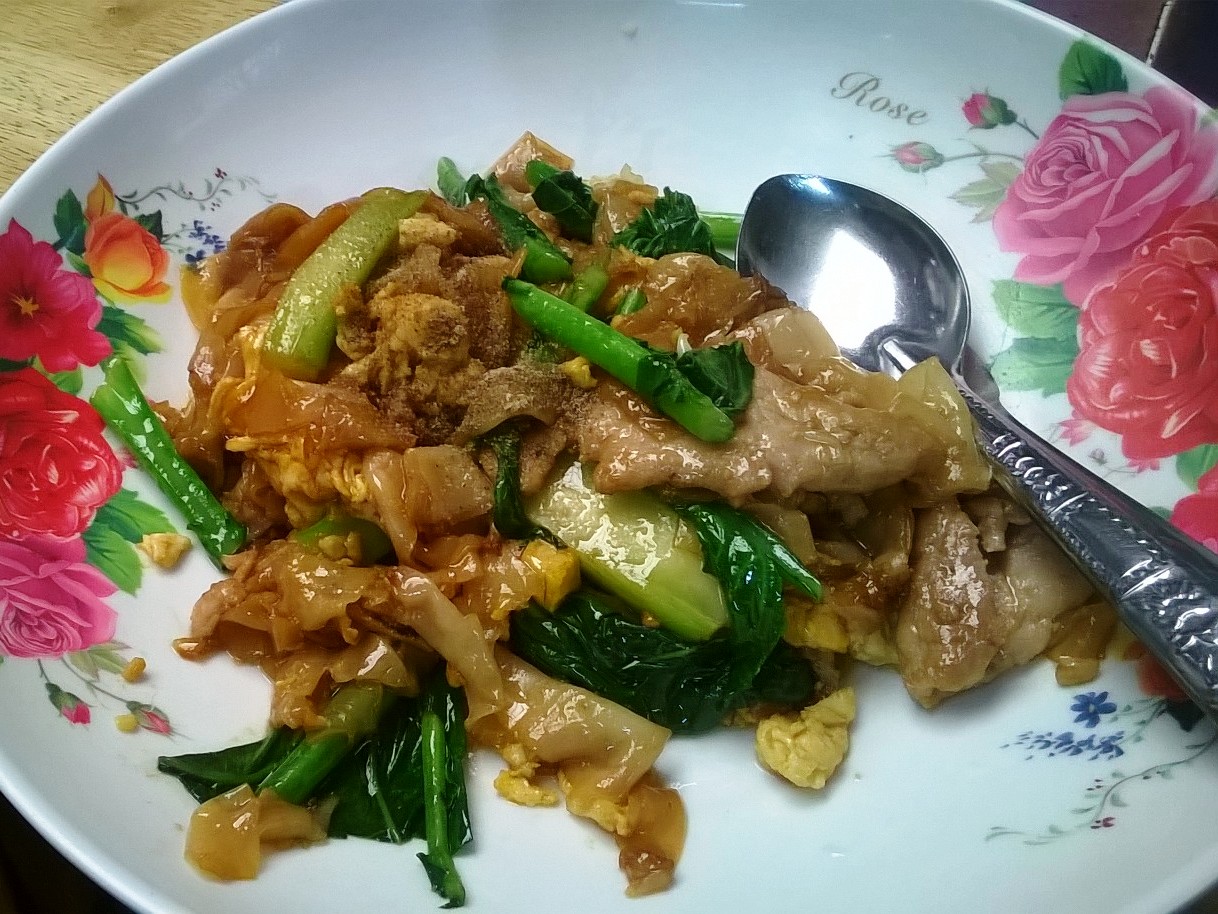 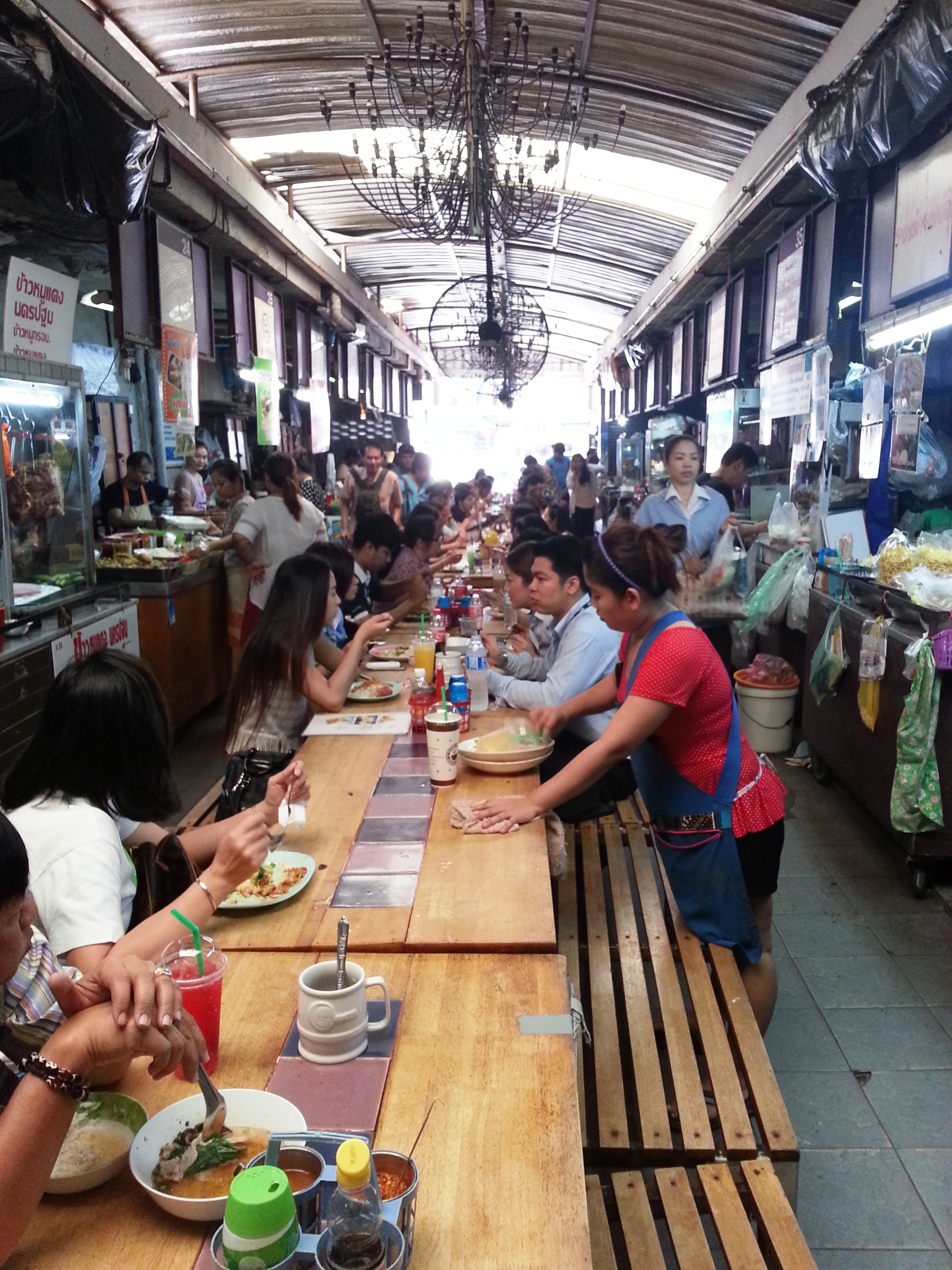 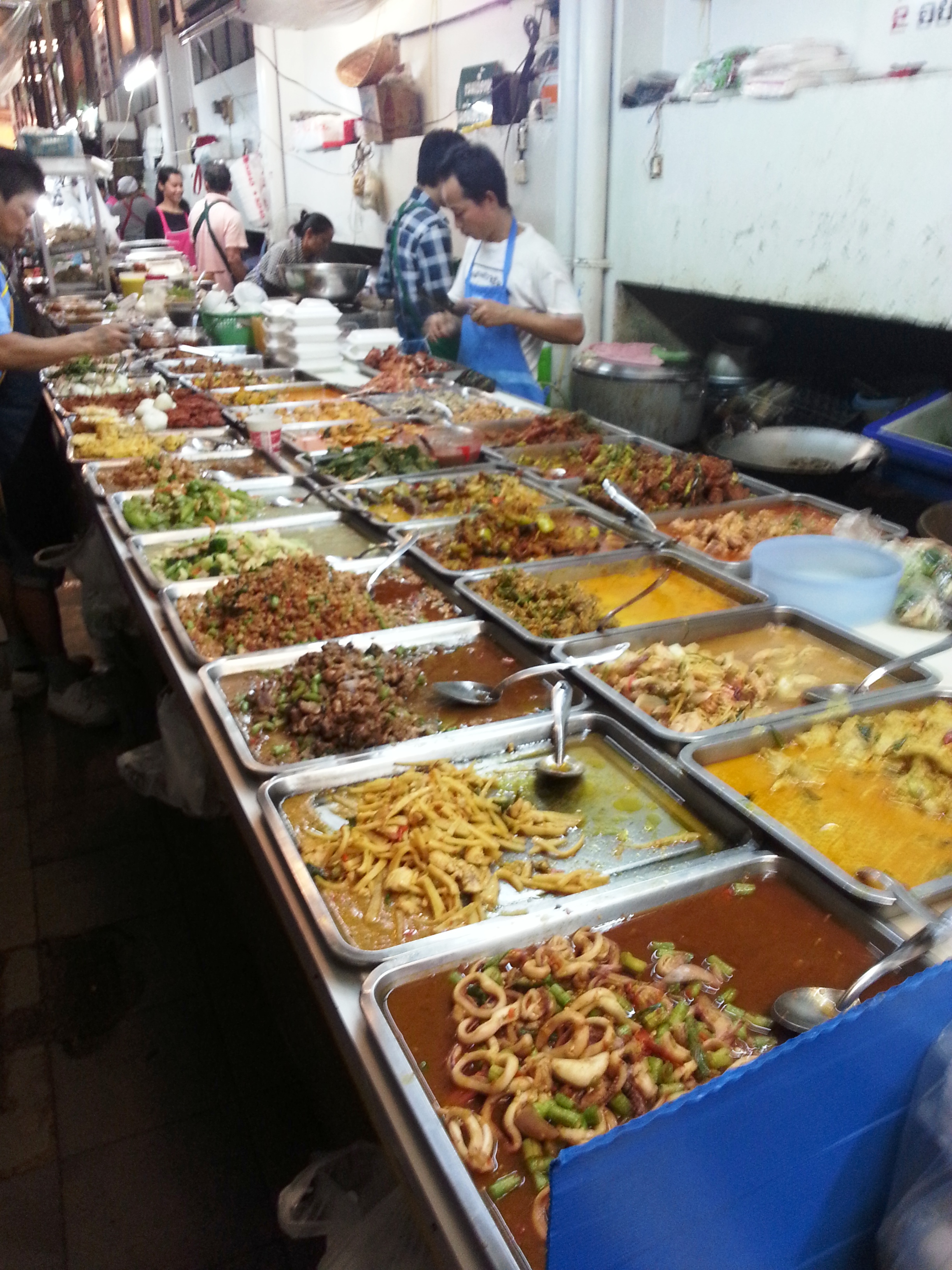