Lof der Zoetheid is a well-known lunch spot in the North of Rotterdam. We had passed it several times on our way to markets or the giant kitchenware shop, Kookpunt, next door. We finally got around to trying it after being seated with the owners during Yama and Dertien’s Bday celebration. They insisted we stop by soon, and promised they would make room for us even if it was full. So we cashed in on that promise and headed over there on a Sunday. We called ahead to see if there were tables free as they don’t take reservations unless it’s for high tea or large groups. The lady on the phone paused, I’m assuming she did a quick scan of the shop, and told us there were still a few tables available, so we made our way over.

However, it wasn’t just any Sunday. It was the Sunday of the Rotterdam Marathon, and the position of our house meant that trying to get there by car would mean a really big detour. Walking was a bit too far, so we went Dutch: we took our dusty, infrequently used bikes out of the storage room. Pano’s bike is definitely in better shape than mine, which has no lights, a wobbly front wheel, and very little to no brakes – it sort of slows down, but going downhill is a recipe for disaster. However, Holland has no hills so that point is moot. Anyway, we were a bit late in our endeavor as the marathon runners had already started passing by the street we had to cross. It was the front end of the marathon, though, so after picking a not-so-perfect thorny-bush spot to cross, we quickly dashed in between a few runners and were off to lunch with only a few scratches on our legs.

To get a sampling of all the different things on offer we went for the sandwich platter of sorts. You’re presented with various bread toppings (ham, cheese, roast beef, chicken roulade) and home-made condiments such as jams, spreads, chutneys, and pickles. This way you can mix and match as you desire. The platter is also served with a soup, which was green and I can’t remember what was in it – maybe zucchini, but I remember it was delicious. The chunks of feta and the mint lifted the flavor. It was all very yummy. 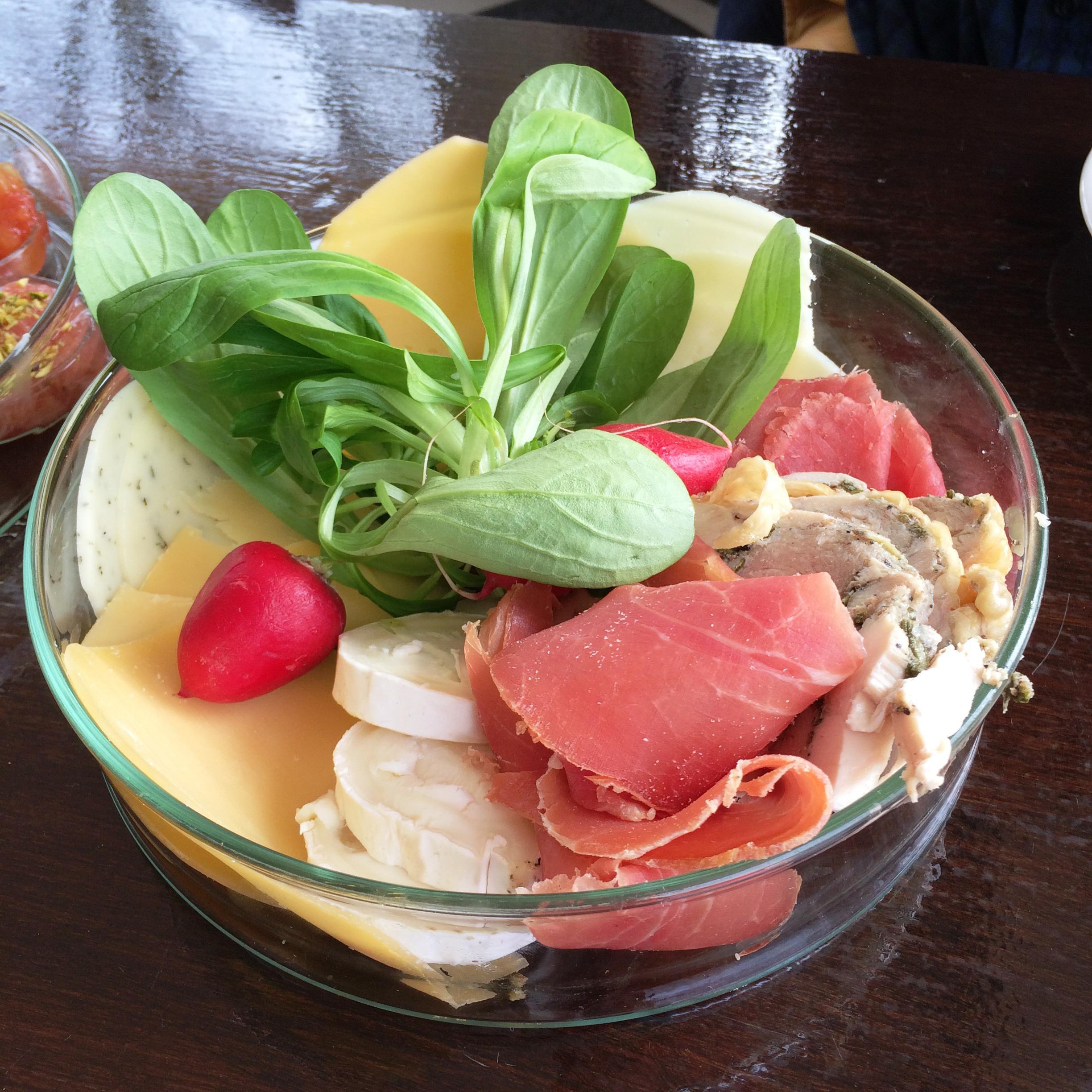 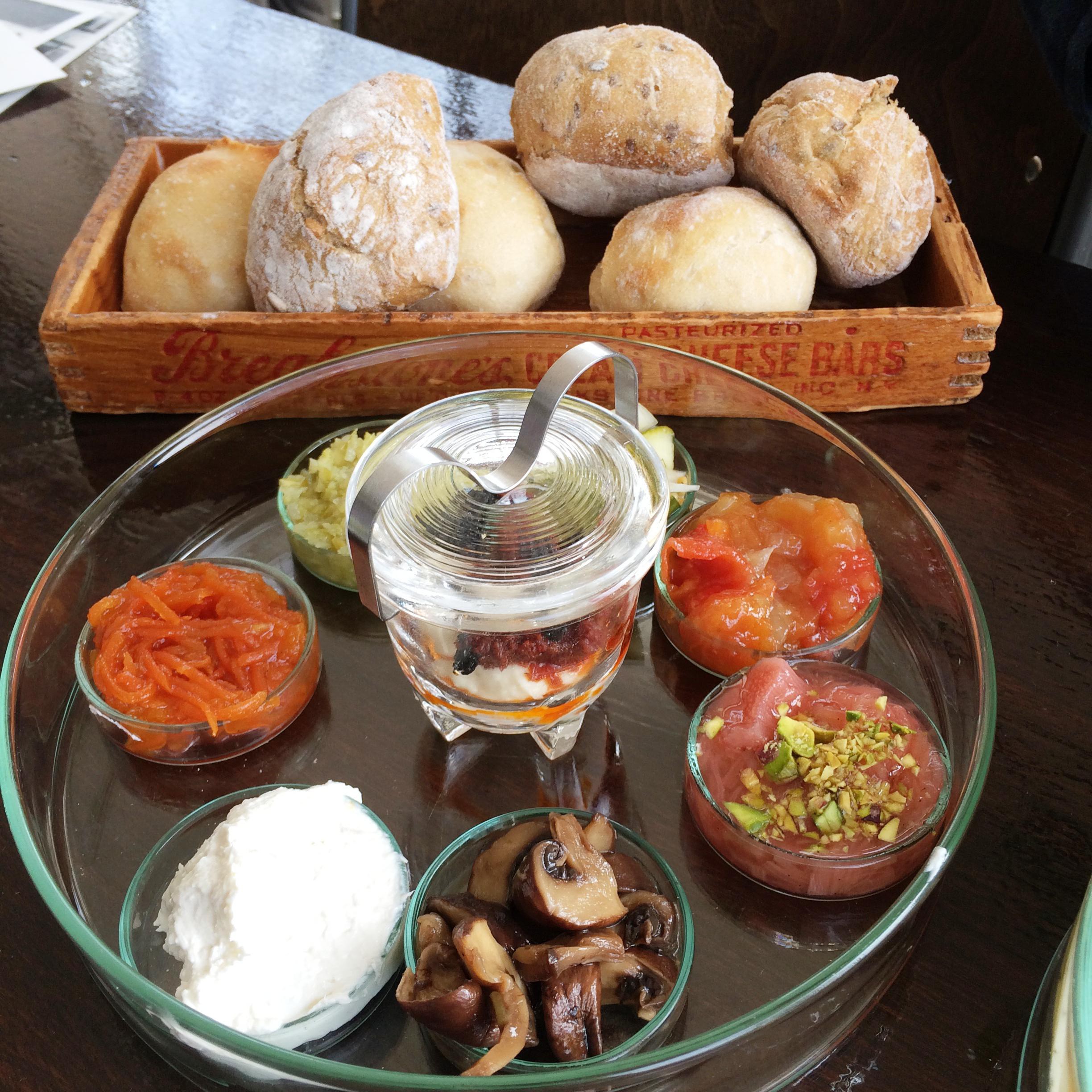 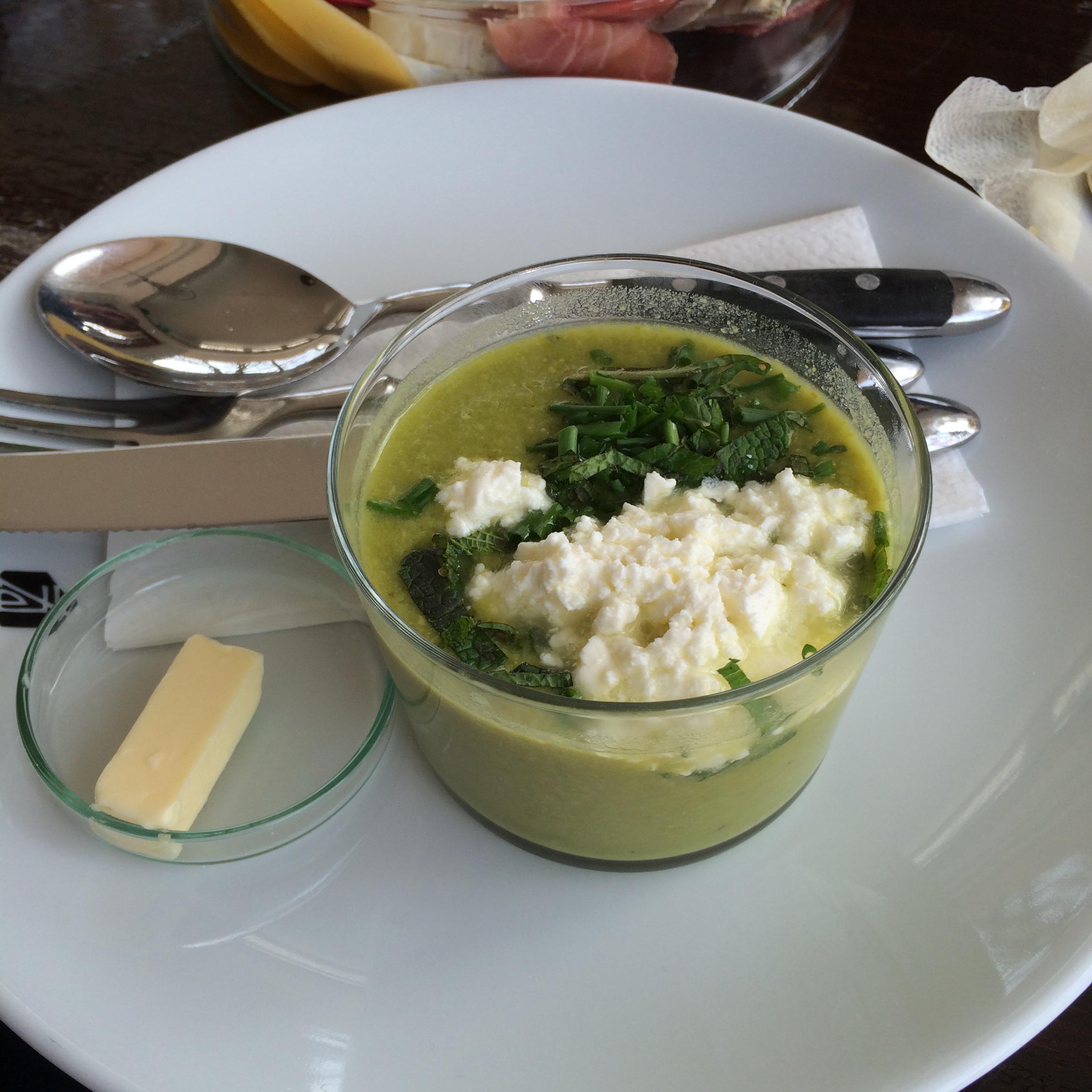 We weren’t done though. We also tried their meatballs, which were equally tasty and served with two different dipping sauces. After all that it was time for dessert. They have a huge counter full of enticing cakes and bars, but for lunch I settled for the scone. I realize it looks quite deformed in the picture but that’s because I started eating it before taking the picture – so this was my sad attempt at reconstructing it. What was not sad was the scone itself, which was flaky, buttery goodness. And though I was stuffed afterwards, I planned ahead, getting a few bars to take home to devour that night. It was a great lunch, and at the table next to us I saw a feast of various cakes and sandwiches – must be their high tea. Definitely need to come back and try that! 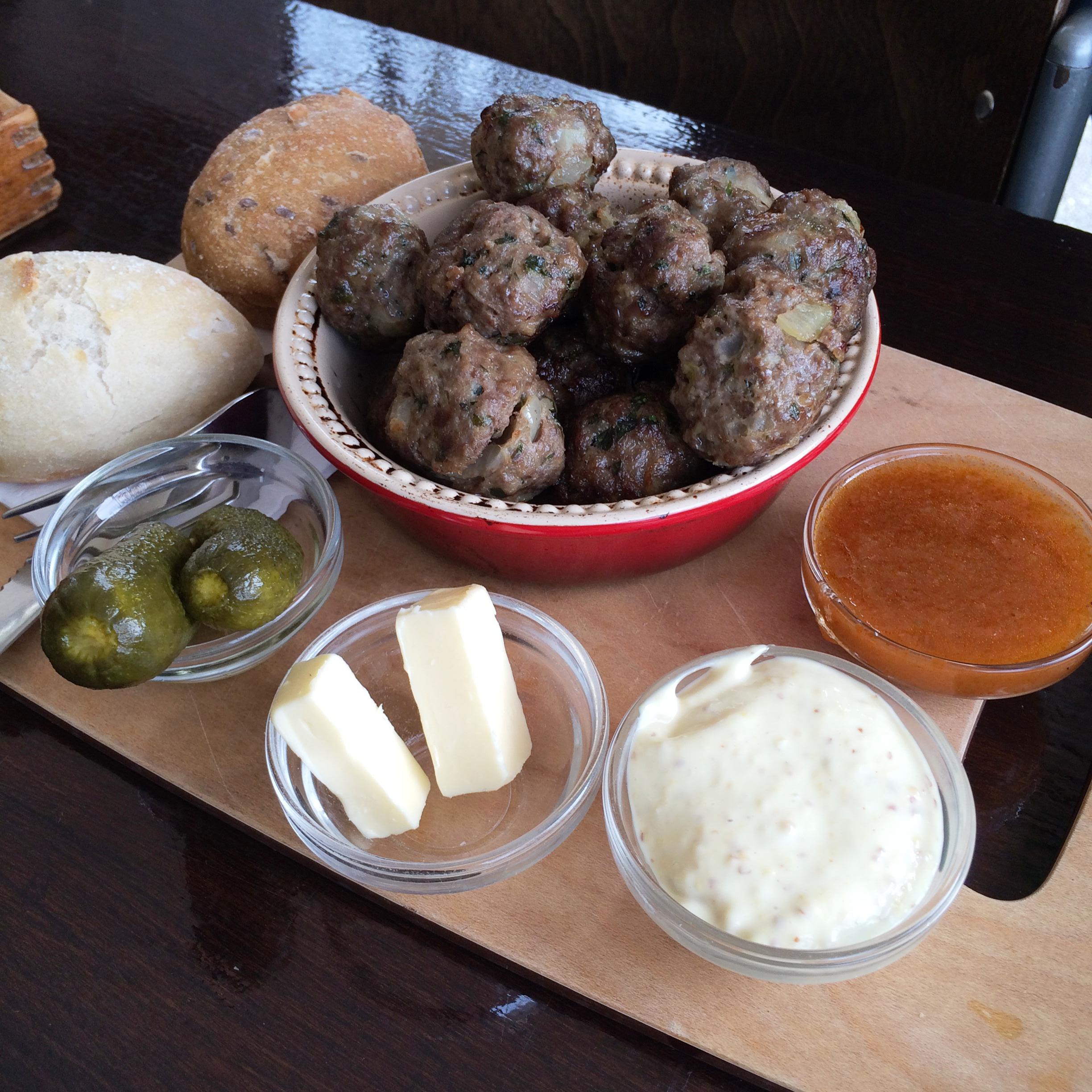 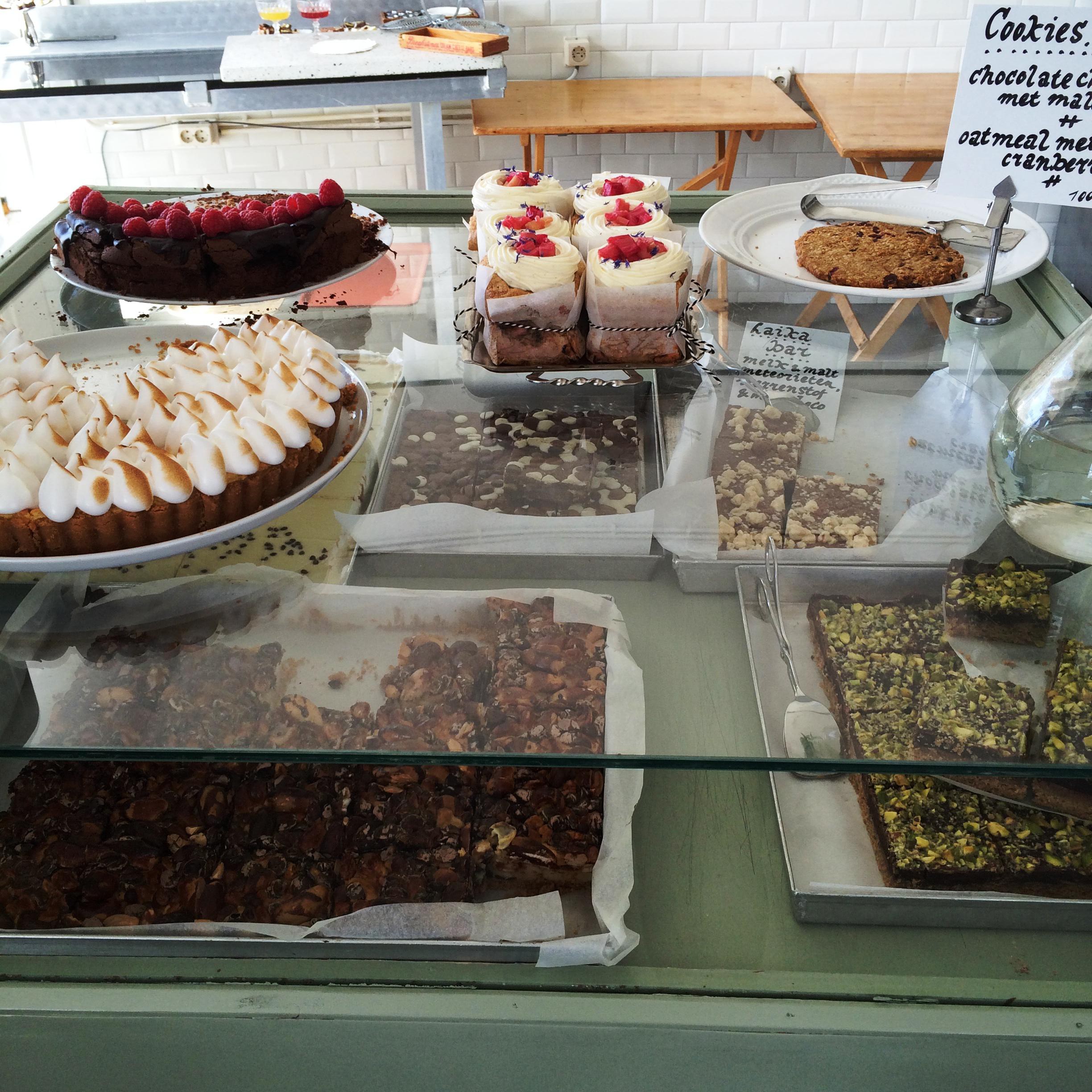 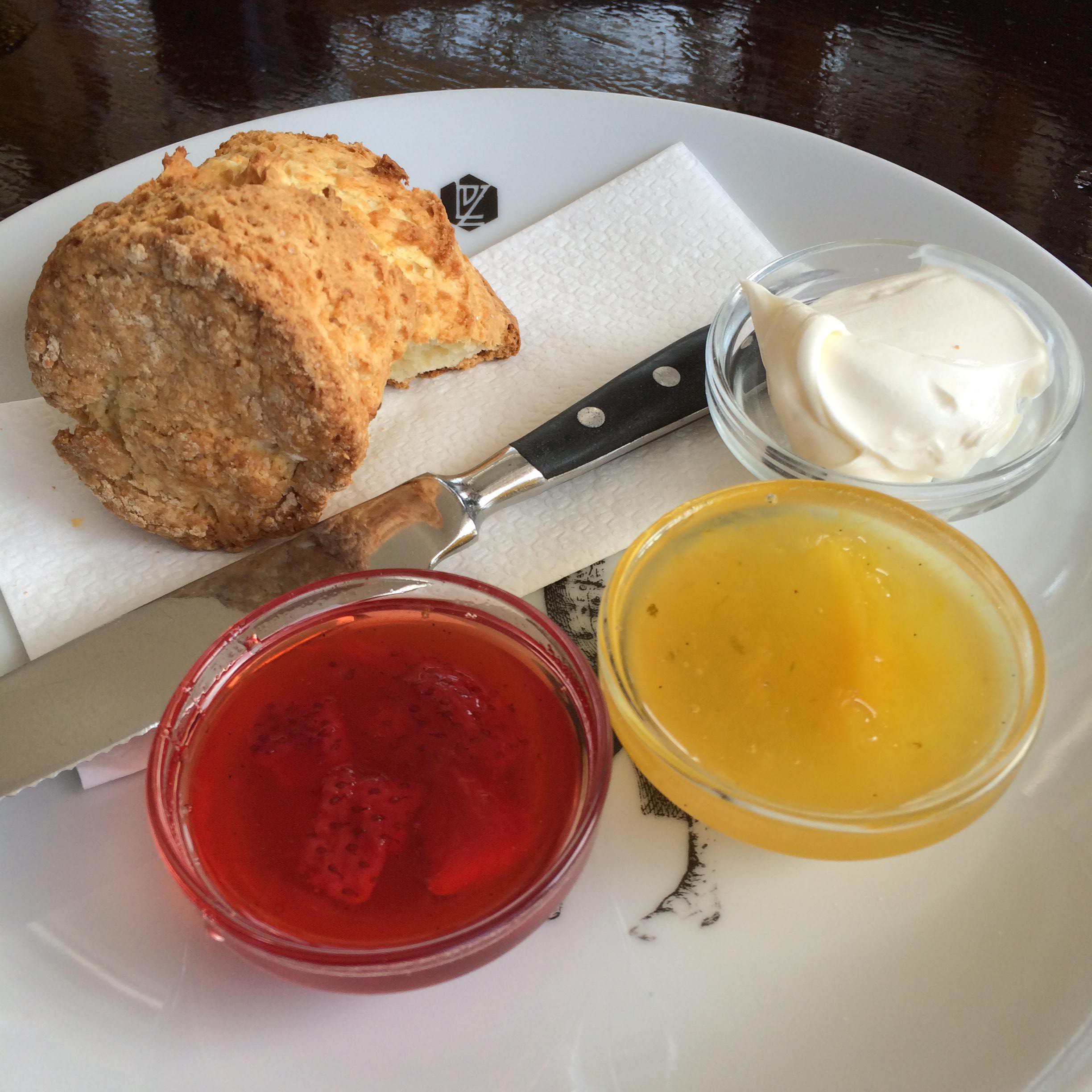 Side story: after leaving Lof der Zoetheid we went to Fenix Food Factory for beer. It took forever to get there as we had to go around the marathon once again. And then, it happened, I met my hill, a.k.a. the Erasmus bridge that we had to cross to get there. I wimped out and walked down the bridge, but bolstered with beer in my system on the way home, I jumped on my bike and said, “I got this!” And by this, I meant my friend, who I held on to and used as a braking system the entire way down. Who needs brakes when you’ve got friends willing to do slightly dangerous things for you?