On the Pannekoekstraat sits a tiny Chinese restaurant called Beijing Bao (formerly Eethuis Bij Bao). We’ve been there every week for the past four weeks, and it is hands down, my favorite Chinese restaurant in Rotterdam. It’s Beijing style Chinese with a heavy Szechuan influence, so if you can’t handle heat, be careful what you order! They indicate heat level with peppers (zero to three).

Beijing Bao has seating for maybe 20-25 people, and three people work there: one waiter, one cook, and one cleaner. The waiter speaks broken Dutch or English, and service is of the Chinese type: quick, abrupt, and to the point. The cook works in a small open kitchen and does everything by himself. So if it’s busy, your food could take a while. But it’s worth it.

Every time we’re there we order the green beans with ground pork. It’s ‘smack in your face’ salty and full of tiny little Szechuan peppers that make your mouth go numb and tingle. The beans have a beautiful black wok-char on them that adds a smoky semi-burnt flavor, also called wok hei or breath of the wok. The garlic version of the green beans is also good, without any heat, but with a lot of garlic, and the beans are semi-steamed, none of that amazing char you get with the pork beans. Another favorite is the pork belly with Chinese cabbage. The cabbage tastes a bit like Korean kimchi, but less of the fermentation and more spiciness. The pork belly has been fried up so it’s still slightly crunchy. Sticking to the pork theme, the mapo tofu (silken tofu with ground pork) is also fantastic. This one is seriously spicy, again with the mouth numbing Szechuan peppers. 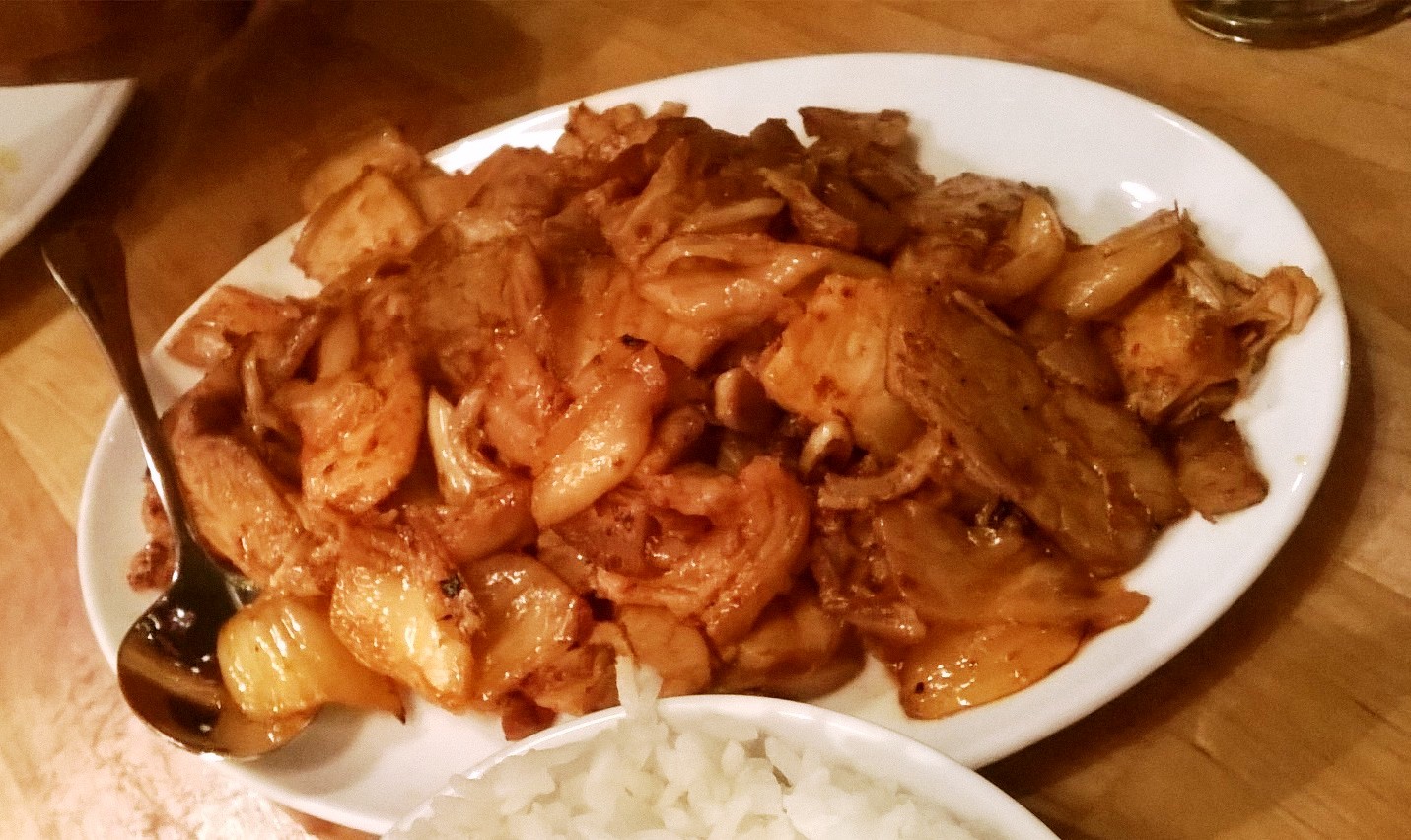 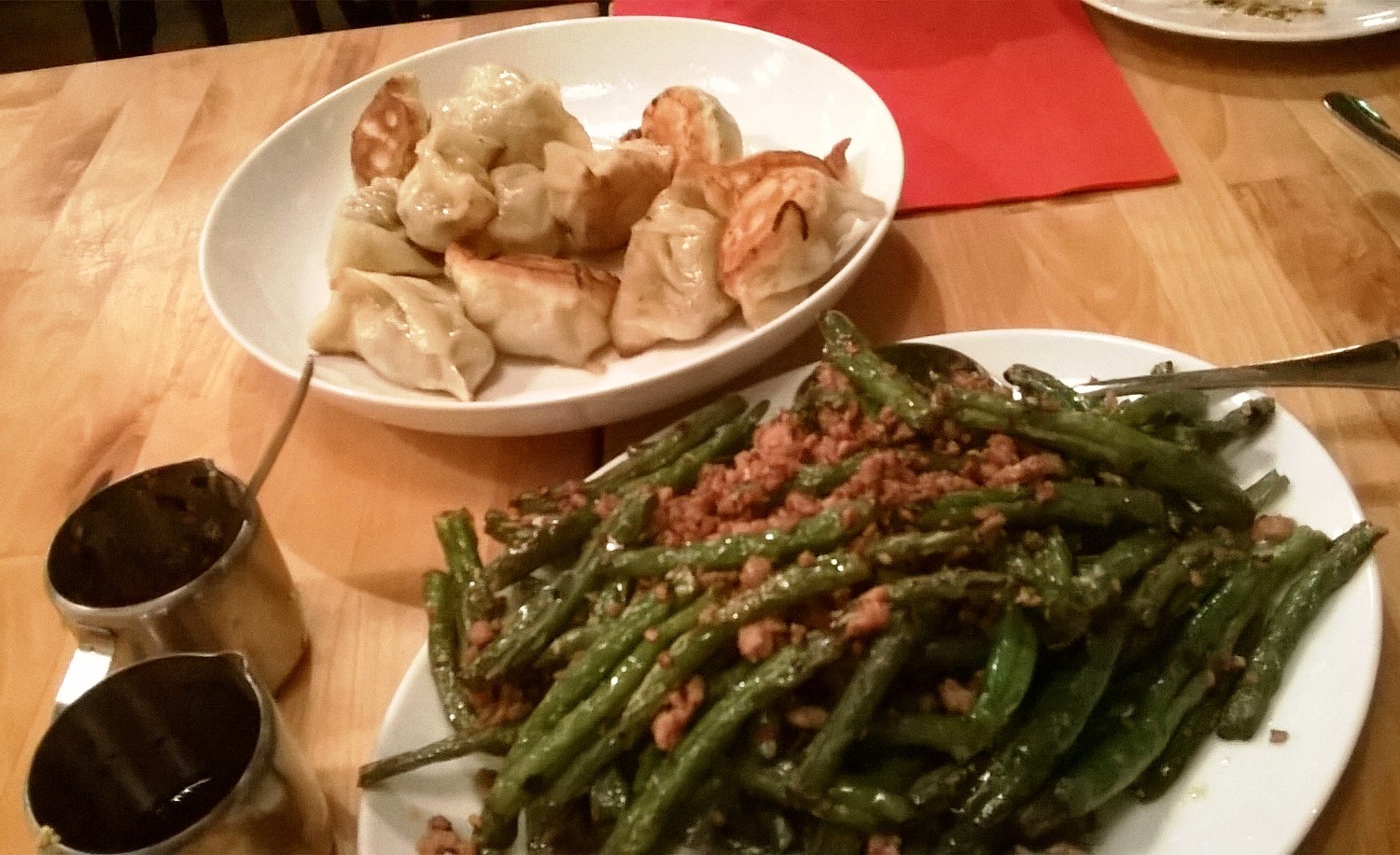 For non-spicy food lovers there are many options on the menu. We often order the sweet and sour fish. The pieces of fish fillet are fried up in a crunchy batter and then drowned in this sticky, sweet and sour sauce. Careful with the first bite, it’s fresh out of the fryer and very hot! There is a strong smell of vinegar coming off of it, but the balance of flavors (sweet, sour, salty) is perfect. We suspect the sweet and sour pork is probably just as good.

They also have a lot of dumplings. We usually order the pork and coriander pan-fried, guotie style dumplings. They serve it with a bit of Chinkiang vinegar and chili oil. The ‘Beijing pizza’, also known as Beijing pie, is a big flat version of the dumpling, also very tasty. To drink, try the traditional green bean drink. It’s earthy and sweet. After a few minutes you’ll see that the bean powder has settled at the bottom. Just leave it there. You don’t have to remix and drink it.

Main dishes cost 8-13 Euros, and if you order three between the two of you, you’ll be stuffed. Our plan is to eventually try everything on the menu, but we keep ordering the green beans and the pork with cabbage… But I’m sure we’ll be back there soon and when we find another jewel on their menu we’ll let you know!

Starting My Second Life – An Ode to Jimmy Picknick, Rotterdam