I started a new job three weeks ago. After a 10 week sabbatical, yes let’s call it that, working full time and having to commute for an hour each morning and again in the afternoon/evening has been quite the adjustment. The result has been not writing blog posts, passing out from exhaustion in the evenings, and going full-blown couch potato in the weekends. Cooking meals seems like a thing of the past. When you both get home at 7pm you want food instantly, so you either make something really simple or you get take out. So much take out… But we did manage to go out for lunch and dinner, I just hadn’t found the time to write about it. The lunch we had that was worth a blogpost was at Grand Garden, a dim sum restaurant in the center of Rotterdam, in the NH hotel. It has gotten rave reviews and is always filled with Chinese people, so on a lazy Sunday afternoon, we peeled ourselves off the couch, and headed over there.

We had to wait to be seated as it was completely packed, but since we showed up at about 2pm we didn’t have to wait too long. The menu was similar to that of the other dim sum places in Rotterdam. Would it really be that much better? Yes it was, but I’ll get to that later. As usual you are given a paper and a pen, fill in your order yourself! Since it was our first time we really wanted to try everything. And I figured, we’ll have leftovers for Monday night. So I did what I always do, over order. However this time I may have taken things too far, after we handed in our order to the waiter, he came back and said, ‘umm, I think you may have ordered too much for two people’. I said, ‘yes I know, it’s OK, I want to take the rest home’. I then joked with P how shocked the waiter would be if we actually finished everything. Yeah, not even close. We took home 4 completely packed take-away boxes, pretty much a meal for 4 more people. We had leftovers for Monday and Tuesday… which, considering my earlier lament, was not a problem at all.

The first dishes to come out were the flat rice noodles stir fried with bean sprouts and kailan in oyster sauce. Both were very yummy indeed. Then the fried chicken wings which were crispy and had this great sauce of garlic and chili on top. The chicken is juicy, the skin is crispy, and the sauce provides a kick. We tried the Chinese pancake with spring onion. Which was completely different than how we’ve had it before. It’s usually a thin crispy pancake, but these were more like man tau rolls. They were slightly sweet and again fried crispy. The combination of sweet dough and spring onion was very good. 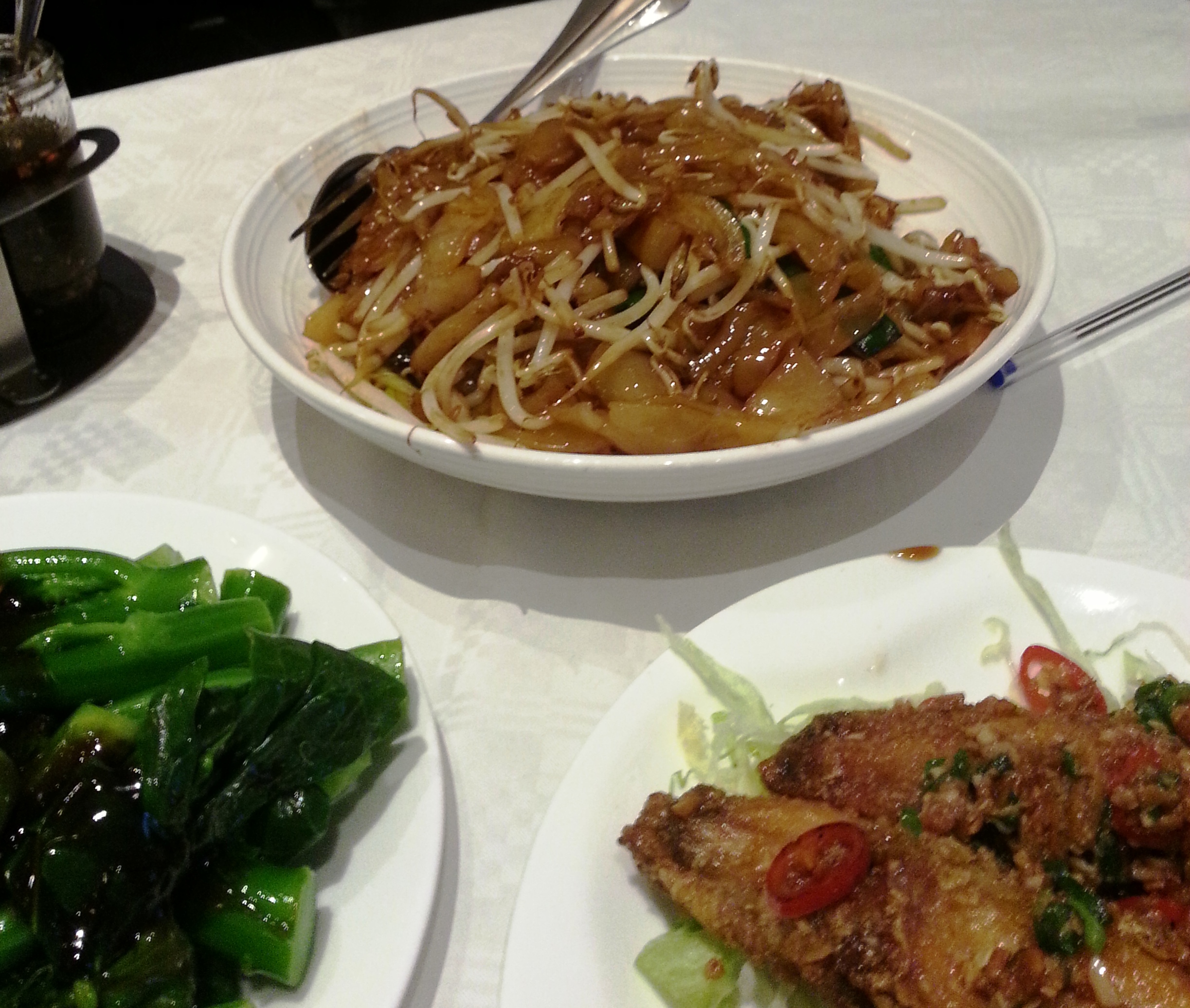 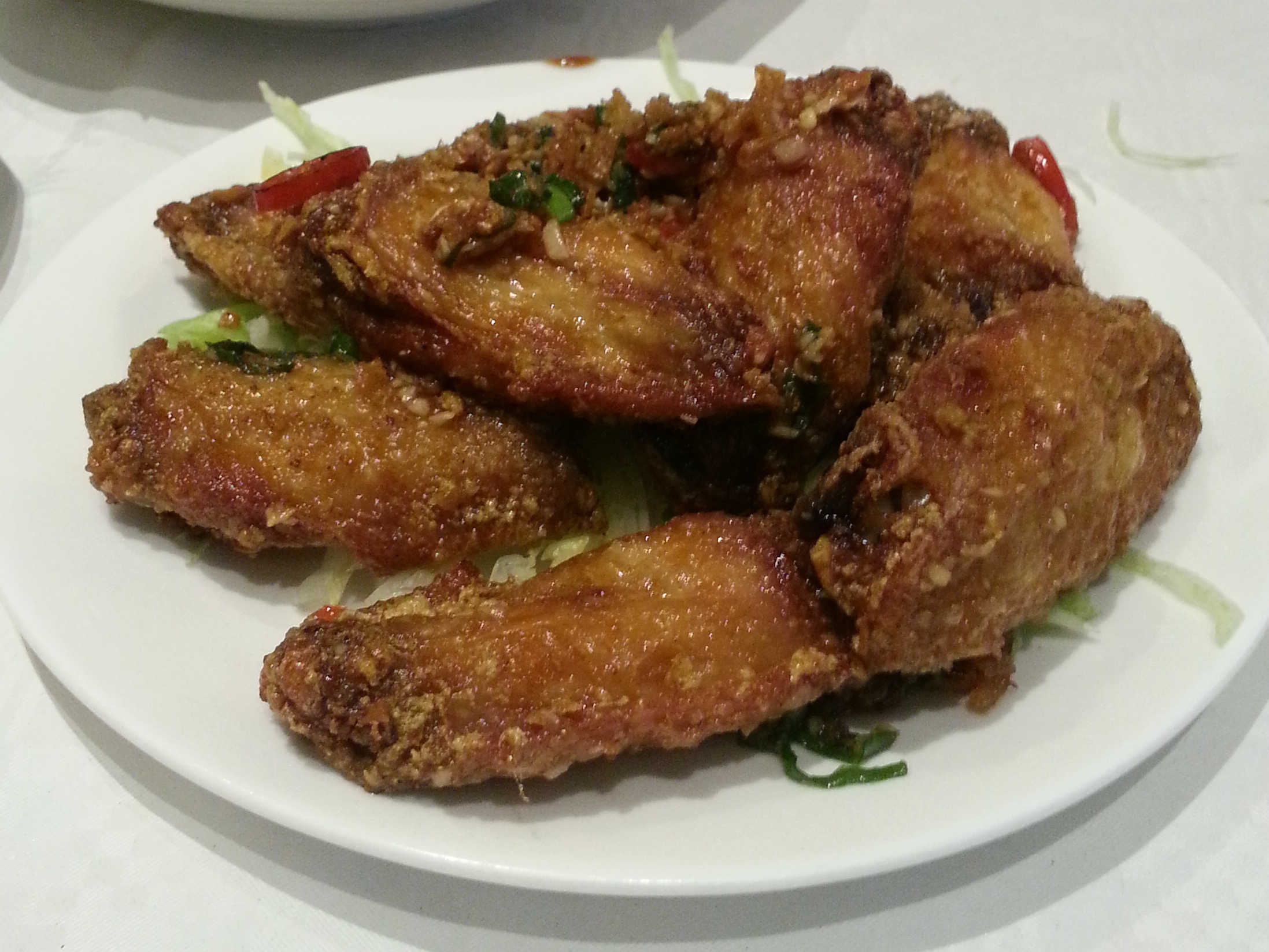 We had more fried goodness: the tofu skin with shrimp and the wu gok which is good but extremely heavy and quite greasy. The filling is meaty and strong but after eating one of these you feel almost violated by grease. We had to try the xiao long bao. This is Pano’s favorite dim sum and it’s hard to find really good ones. The best I’ve ever had were in Xiamen and Singapore. These were okay. The little liquid there was inside was flavorful and the meat soft, but not real XLB. 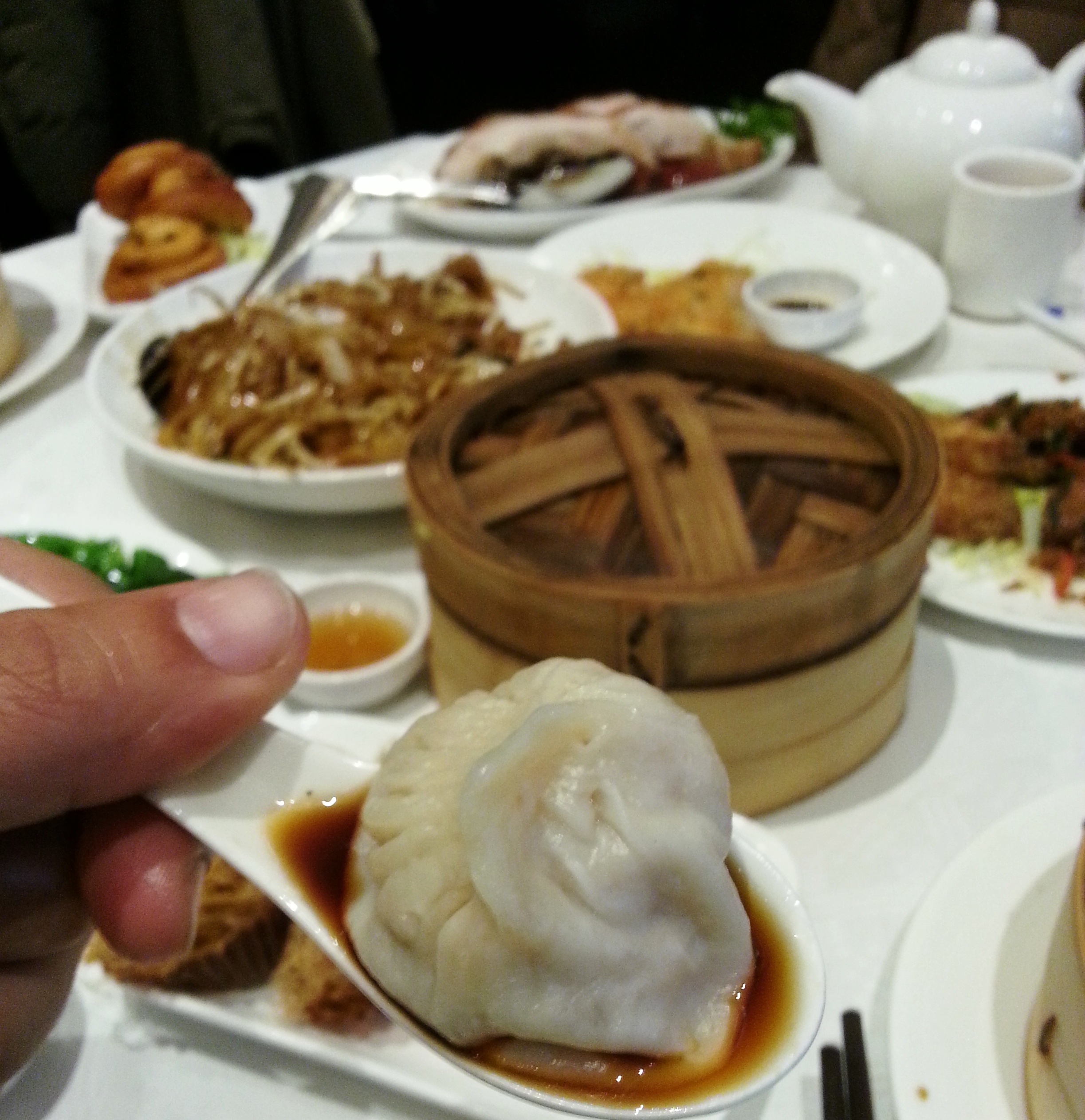 Picture taking was not a priority that afternoon, apologies for that. We also ordered some barbequed meat: cha sieuw, or char siu, and crispy pork belly. The char siu was really good. And I mean really good. The meat was tender and the sweet and salty bbq flavor was perfectly balanced. The pork belly was good as well: not too much fat between skin and meat and not too salty. The skin itself was nice and crispy without being too hard. The char siu bao was also good, but we didn’t even touch it and ate it at home later that night. Then we had sticky rice with salted meat rolled up in steamed bao dough, not a light bite but very good. Sticky rice with meat is a definite favorite for me, also widely available in Indonesian cuisine. Lastly was a sweet dim sum, steamed yellow cake. Had a few bites of it at the restaurant and ate the rest at home that night.

We really enjoyed our lunch there and everything was really flavorful. We had a bit of an MSG-high afterwards, but it was worth it. The dim sum really is better than the other places in Rotterdam so we will definitely be coming back for more. I think next time we’ll drag some people with us so we can order even more.