When I heard that two of my favorite places in town were getting together to organize a birthday party, I made sure to keep an eye out for reservations to become available, and when they did, I hesitated not.
So this all played out about a month ago when Dertien and the eponymous Japanese cuisine Yama organized their first birthday party. As I’ve written before, Dertien and Japanese cuisine Yama have a history together, since Dertien’s chef/owner Pepijn Schmijnk used to own Eendracht, which closed in 2013. Pepijn’s friend Yama subsequently took over that space about a year ago to open his own place, and Pepijn and his team opened Dertien around the same time, further down the road.
Dertien and Yama have joined forces for one-off events before. Most recently ‘Ramen night’, during the international film festival with their showing of the Japanese culinary classic ‘Tampopo’. And even earlier, they organised ‘Eendracht goes Japan’, where they did a kaiseki style dinner. This time around, it was going to be izakaya style, of course heavily influenced by local ingredients.

As I arrived at the restaurant that night, Yama’s sous-chef Saito-san was working the yakitori station outside, already producing enticing aromas. I made my way in and was greeted warmly by Ward of team Dertien and Yuko-san and Yama-san. Welcome drinks, sake cocktails, were being served at the bar. I collected mine and went looking for a table. It was already getting quite busy, but I found two spots at a table with 8 other people. My friend V, who was joining me, was still on his way. I settled in at the table and sipped the cocktail while awaiting the start of the festivities. V arrived just as the first dishes were coming out. 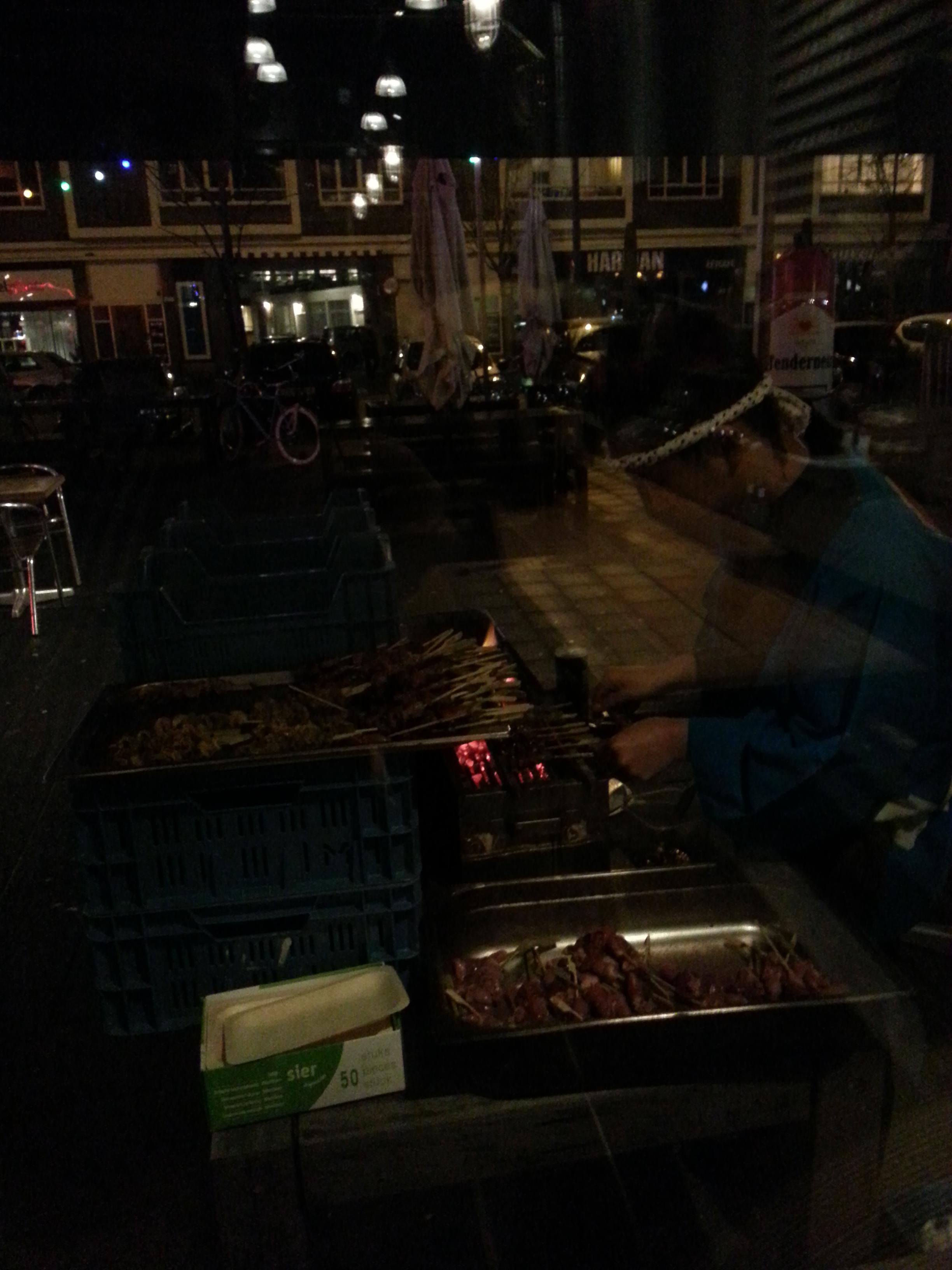 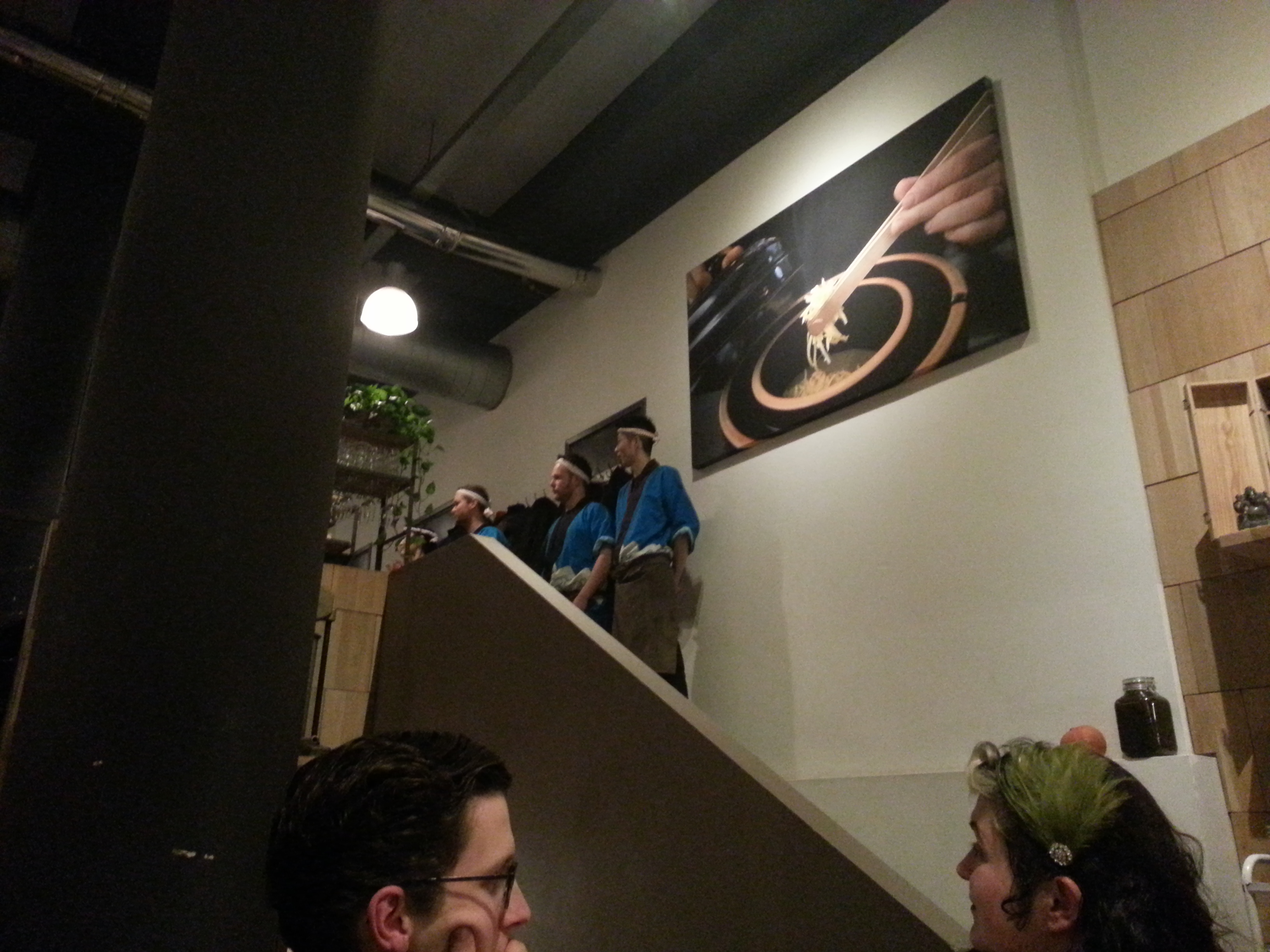 The dinner kicked off with a series of tsukemono inspired dishes, that is, dishes with a pickled or fermented vegetable incorporated into it. Dertien does a lot with pickles and ferments, so this matches perfectly with the izakaya theme.

First up, sourflower. Fermented cauliflower served on an almond tofu base, with torched scallops and miso sauce. The scallops were nicely cooked, still delicate, and worked well with the miso, and the sourflower, living up to its name, provide a tartness to balance out the creamy tofu. Great dish. Most of the dishes tonight were served as large portions to be shared, which is nice because it leads to interaction at the table.
The second dish was pickled Jerusalem artichoke, with sesame mayo. I’d never had pickled sunchokes before, but it worked. Nice and crunchy. The chokes were sliced really thin, so I guess this is a good way to enjoy sunchokes without suffering the explosive ill-effects ;). 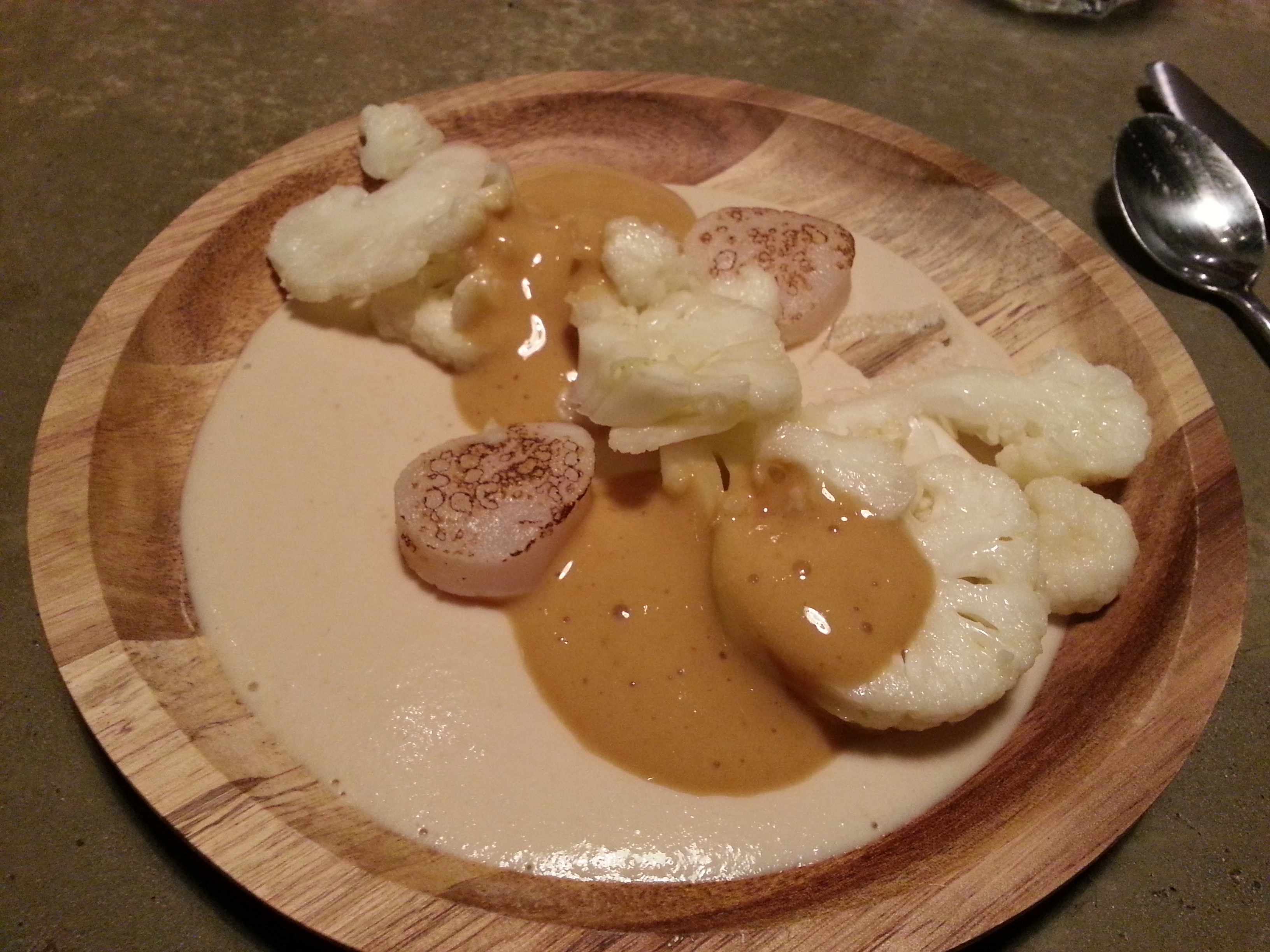 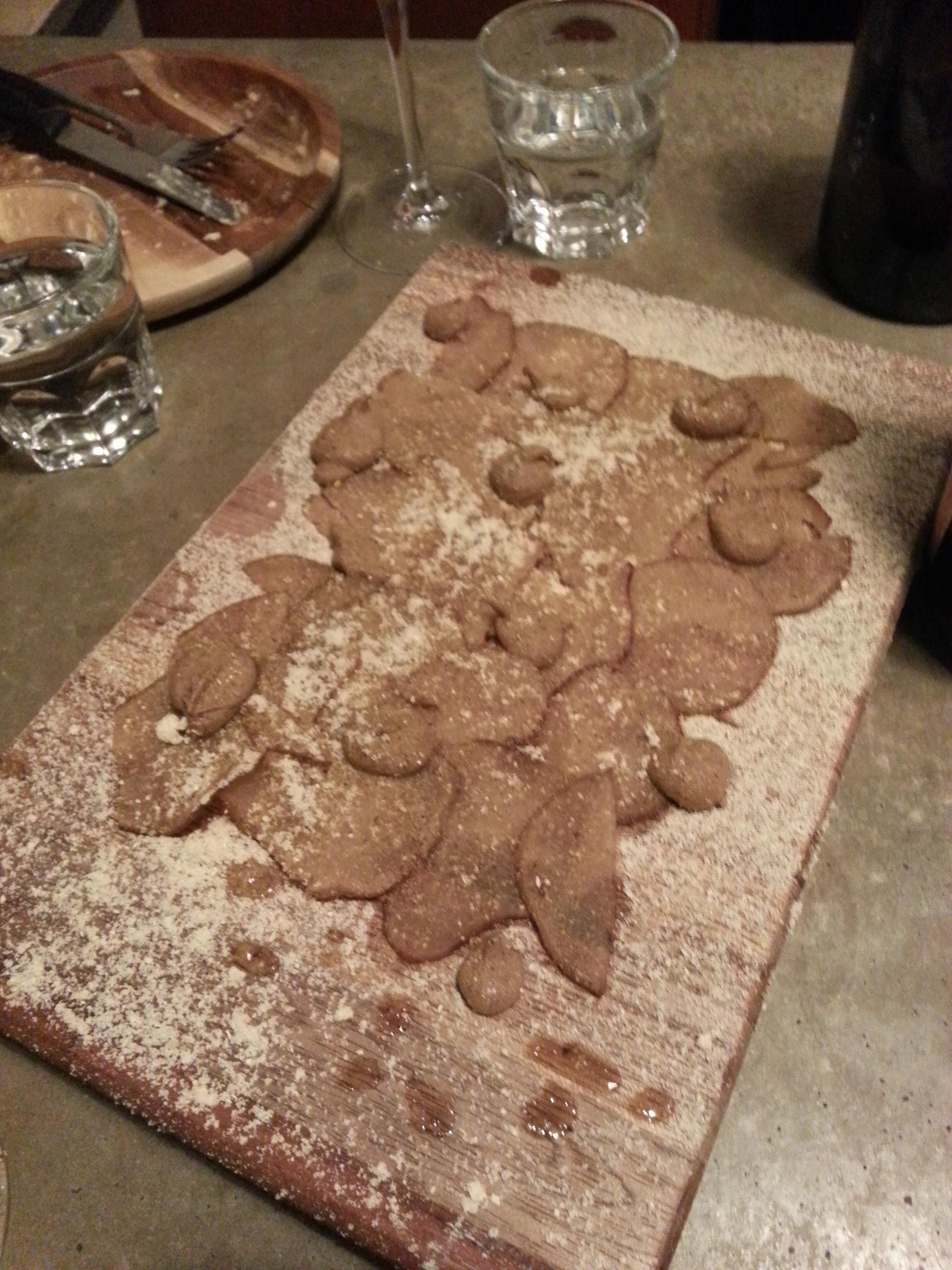 While these dishes were being served, yakitori was going on outside. Each table was given a turn to go outside and collect two skewers for a chickeny intermezzo. We had one skewer of torikawa-yaki, crispy grilled chicken skin which ticked the crunchy, smokey and fatty boxes. We also had a skewer with hatsu-yaki, chicken heart, and rebā-yaki, chicken liver. Both cooked medium, retaining its juice, which is exactly how I like it. 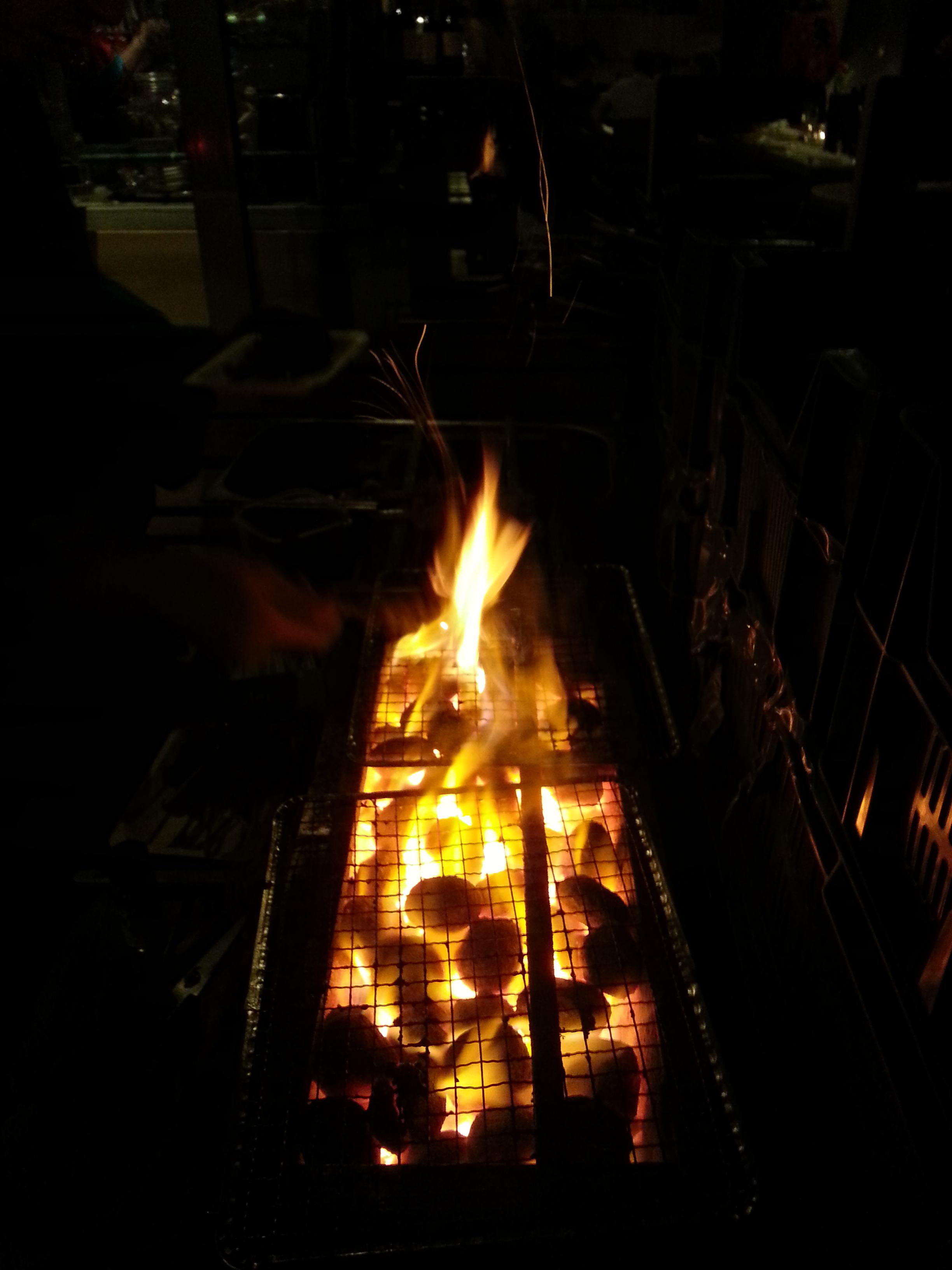 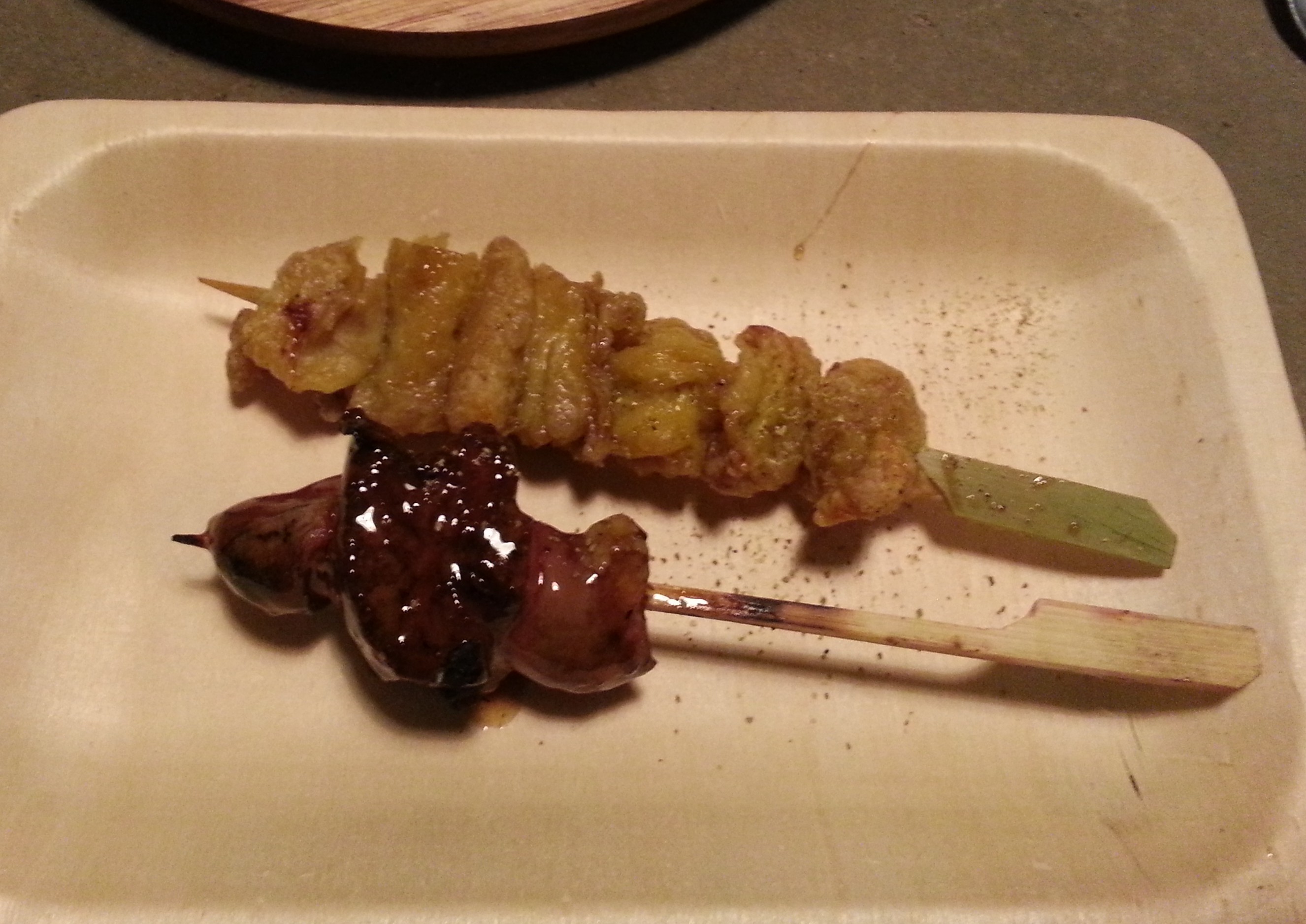 We were still savouring the yakitori when out came chioggia beets with red beet foam, red beet powder, and grated aged goat cheese. Earthy and tart, with the salty goat cheese. The final tsukemono inspired dish was the salsify, sliced lengthwise with pumpkin seed oil, freshly grated horseradish, and apple-miso powder made from fermented apple cores. Pretty complex flavors in this simple looking dish with the apple note really came through nicely. 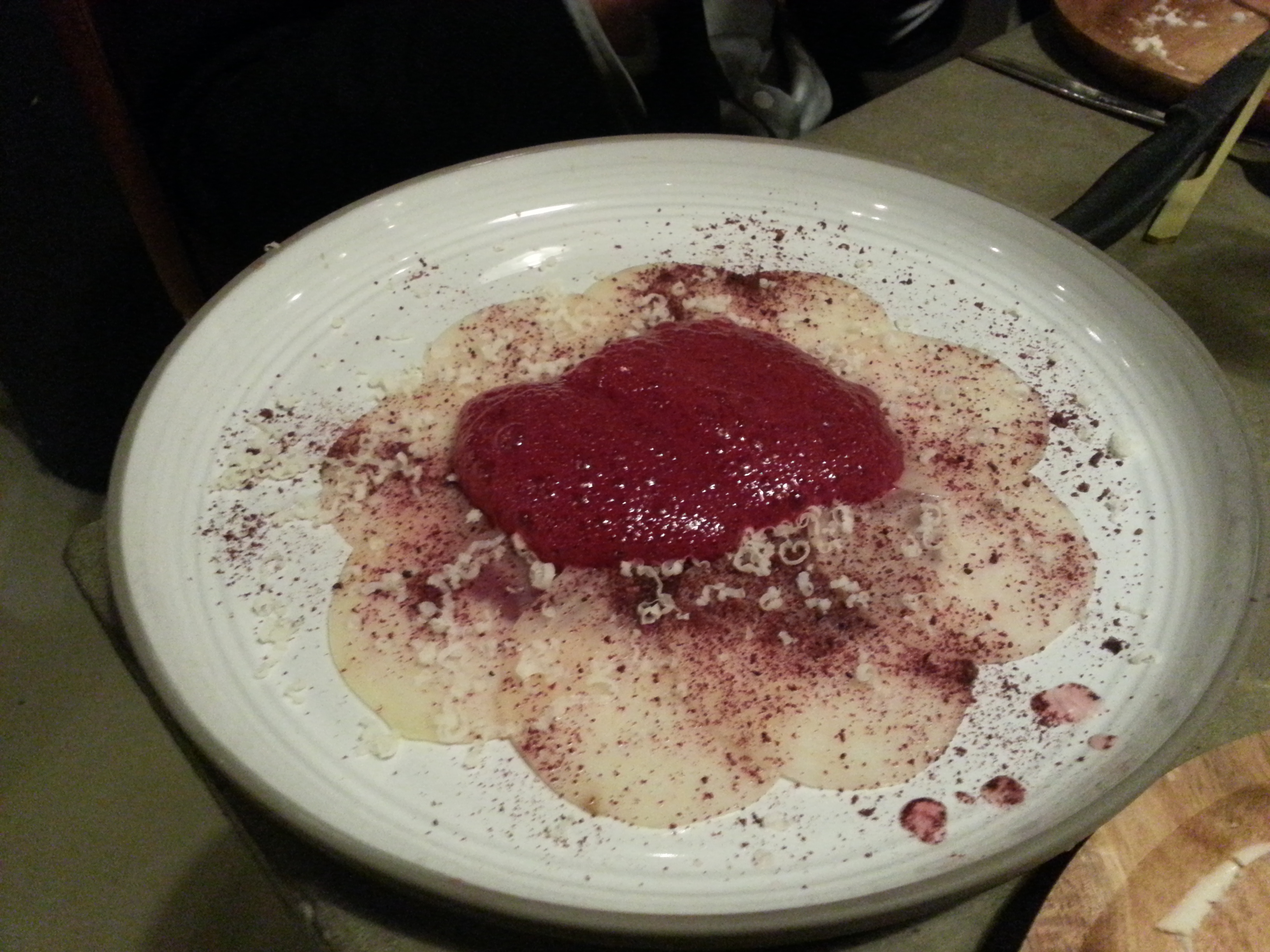 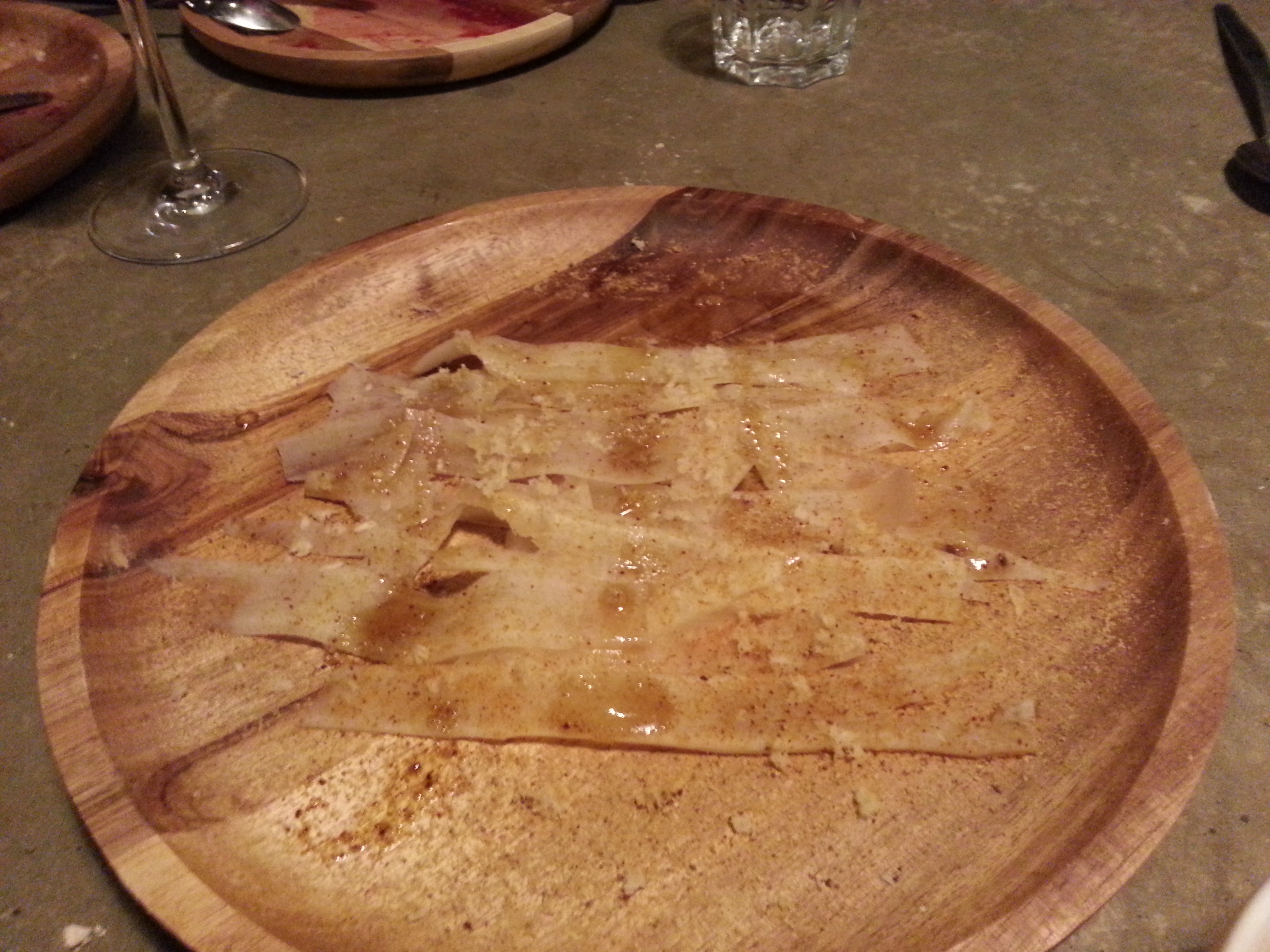 Next up, a spoon with at the base some thinly sliced pancetta. On top of that pea cream, dried seaweed, and herring kaviar.
Then, venison tataki, with fermented brussels sprouts, chestnut oil, chives, and pickled onions. The ginger and soy tataki style marinade worked well with the fermented sprouts and the onions. And the chestnut oil rounded everything off nicely.
Meanwhile, our table, a mix of industry and non-industry, was really fun, conversation ranging from where to have the best telo bakkeljauw in Rotterdam, to favorite burger joints and the sharing of various other food and drink experiences and tips on restaurants in Rotterdam. 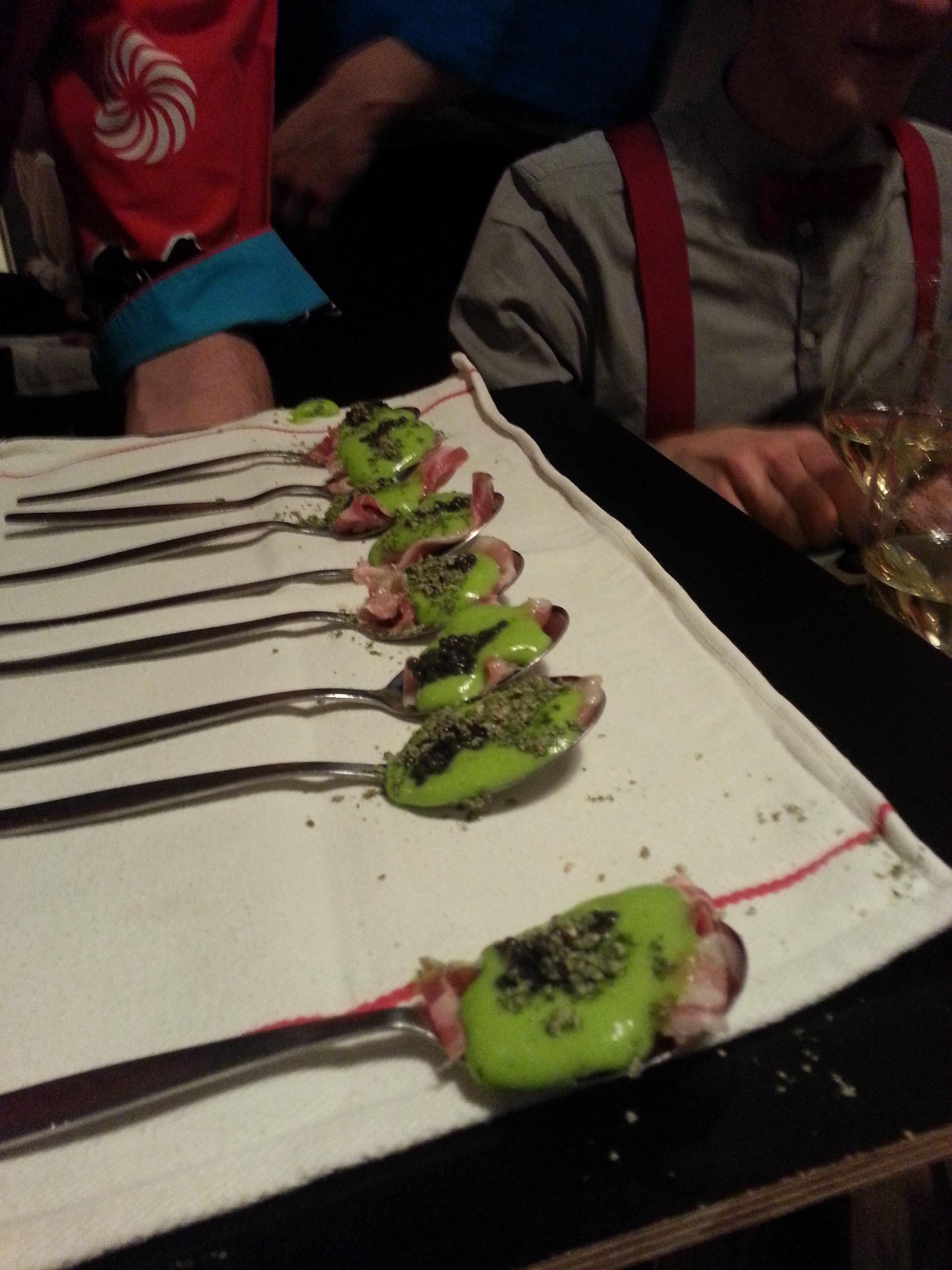 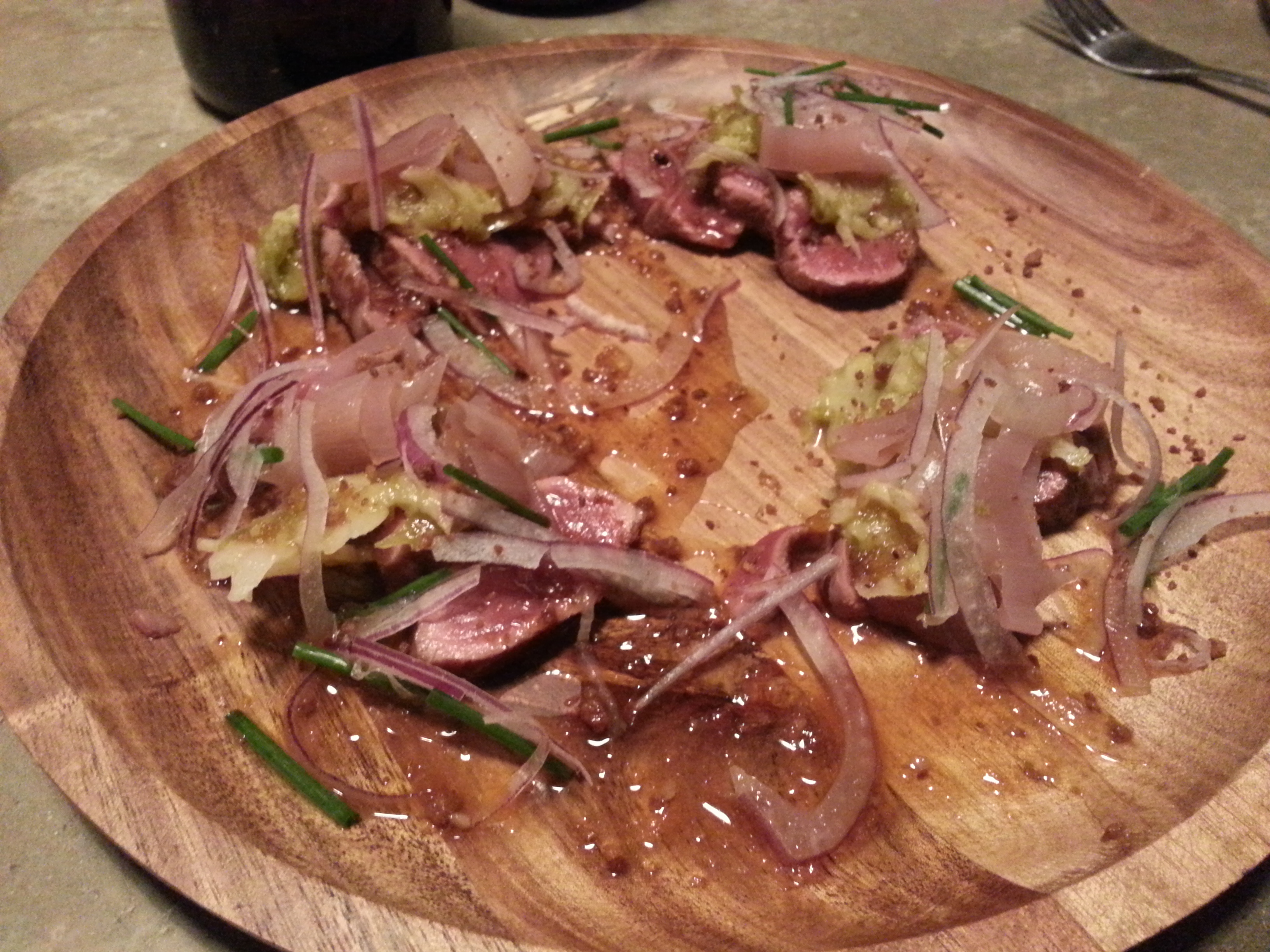 Meanwhile, the food kept coming. Deep fried smelt and grey shrimp with Japanese mayo, two favorites of mine.
Following that, salmon tataki, with a soy based jelly, and shiso leaves. Again beautiful marinade on the salmon, and the shiso leaves providing their distinct flavor. 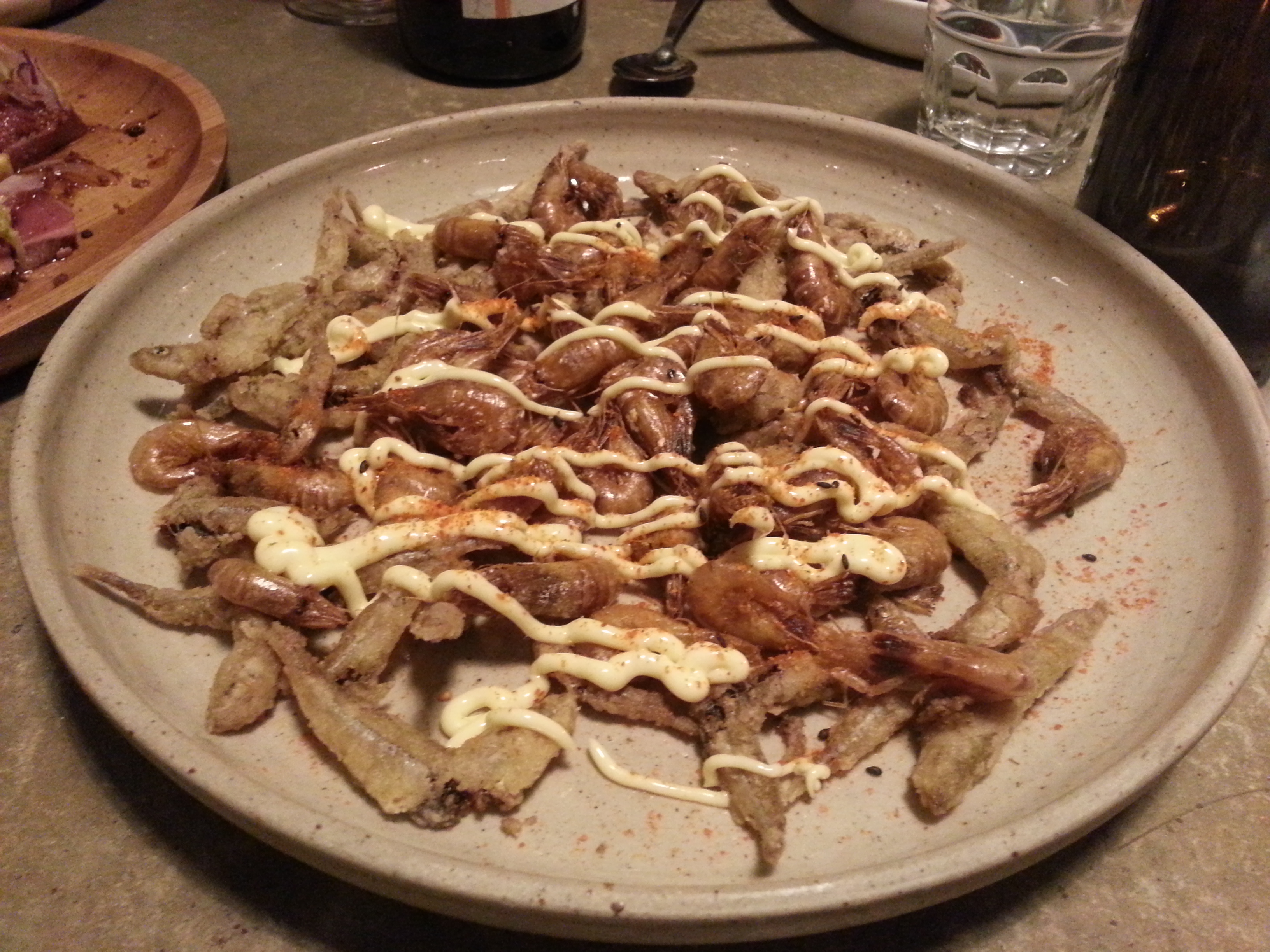 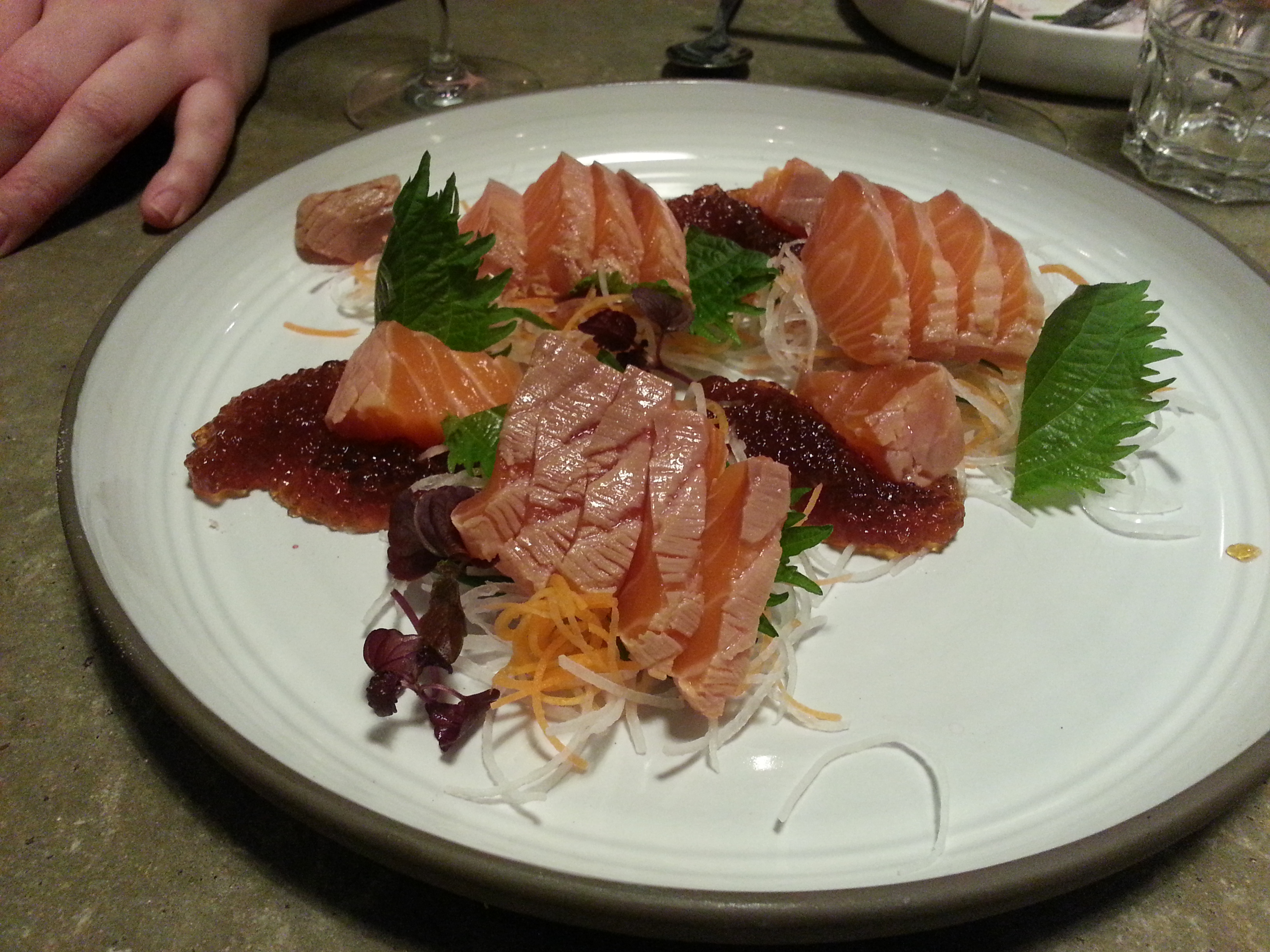 Then it was sushi. In my opinion, Yama makes by far the best sushi in Rotterdam. We had ebi, my favorite: unagi, and tako with shiso. Being that these had to be made ahead of time for so many people, they weren’t as good as when you have them in the restaurant, but still really good. Go there! 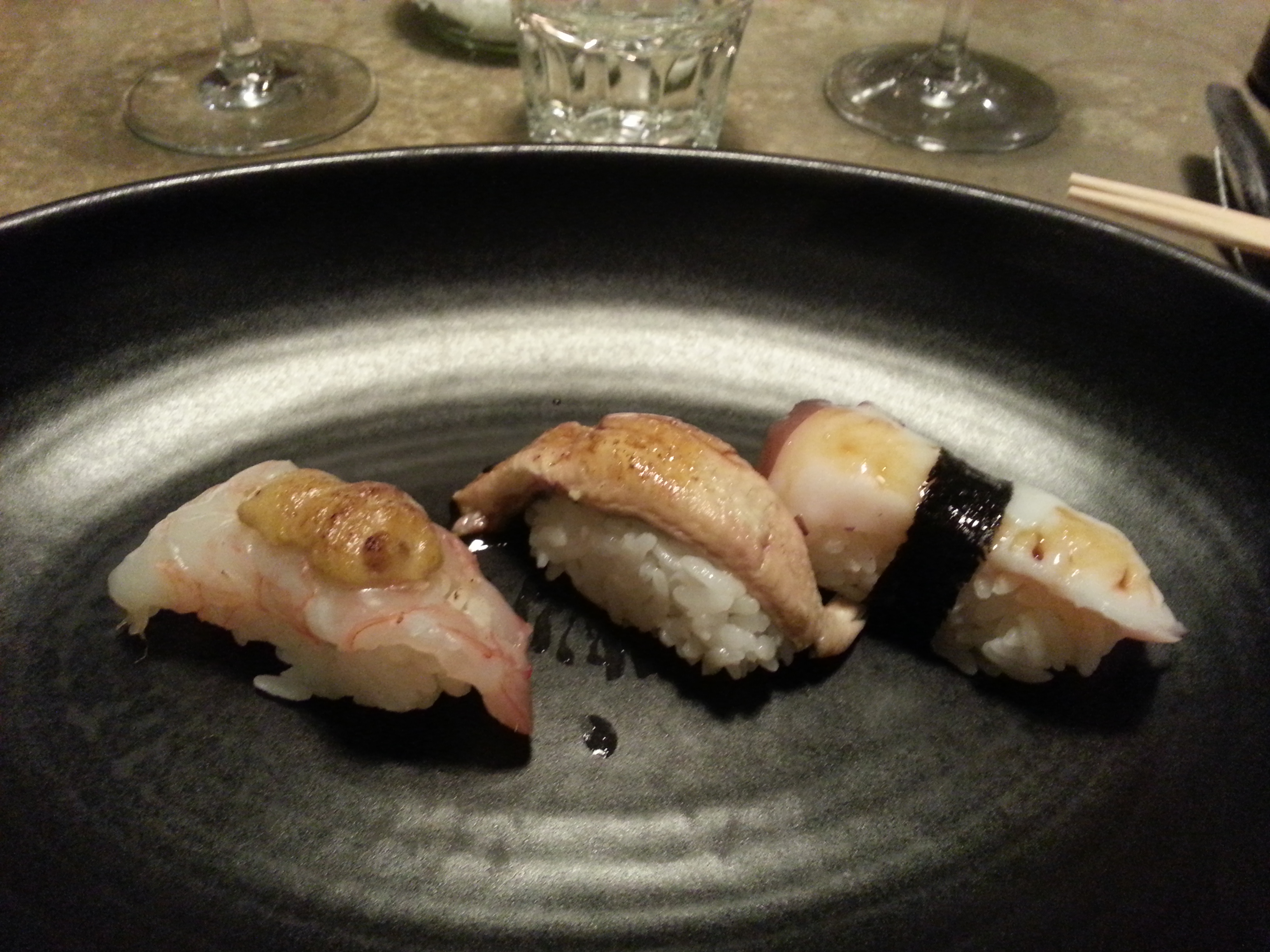 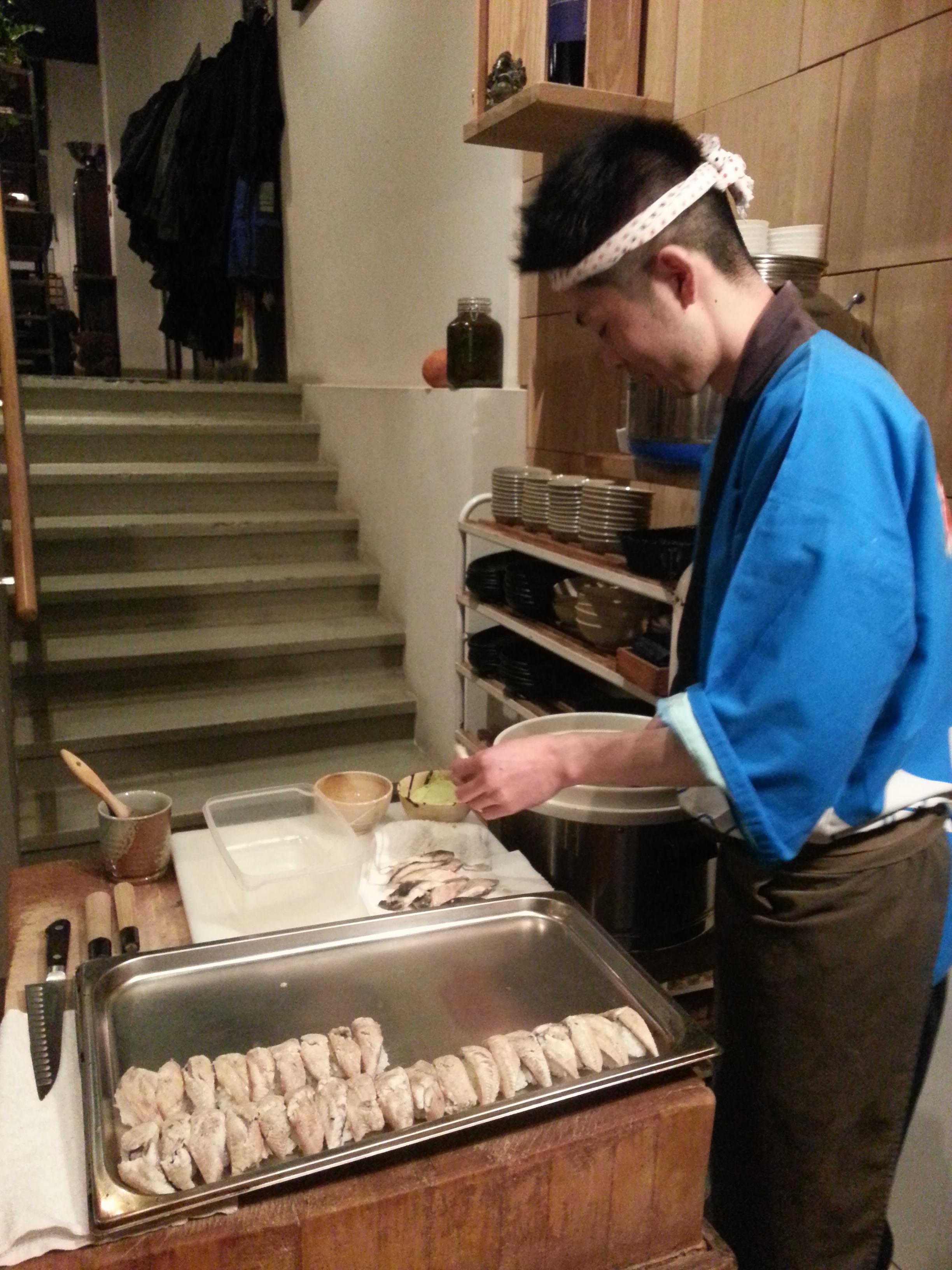 Oyster mushrooms, konbu dashi jelly, miso of cooking pears. Another great vegetable dish. The oyster mushrooms had only received a lick of heat, so still had a good crunch and combined with the dashi jelly and the pear miso, made for a nice umami hit.
Mussels in a cream sauce. I don’t remember exactly what was in the sauce, but we drank all of it. 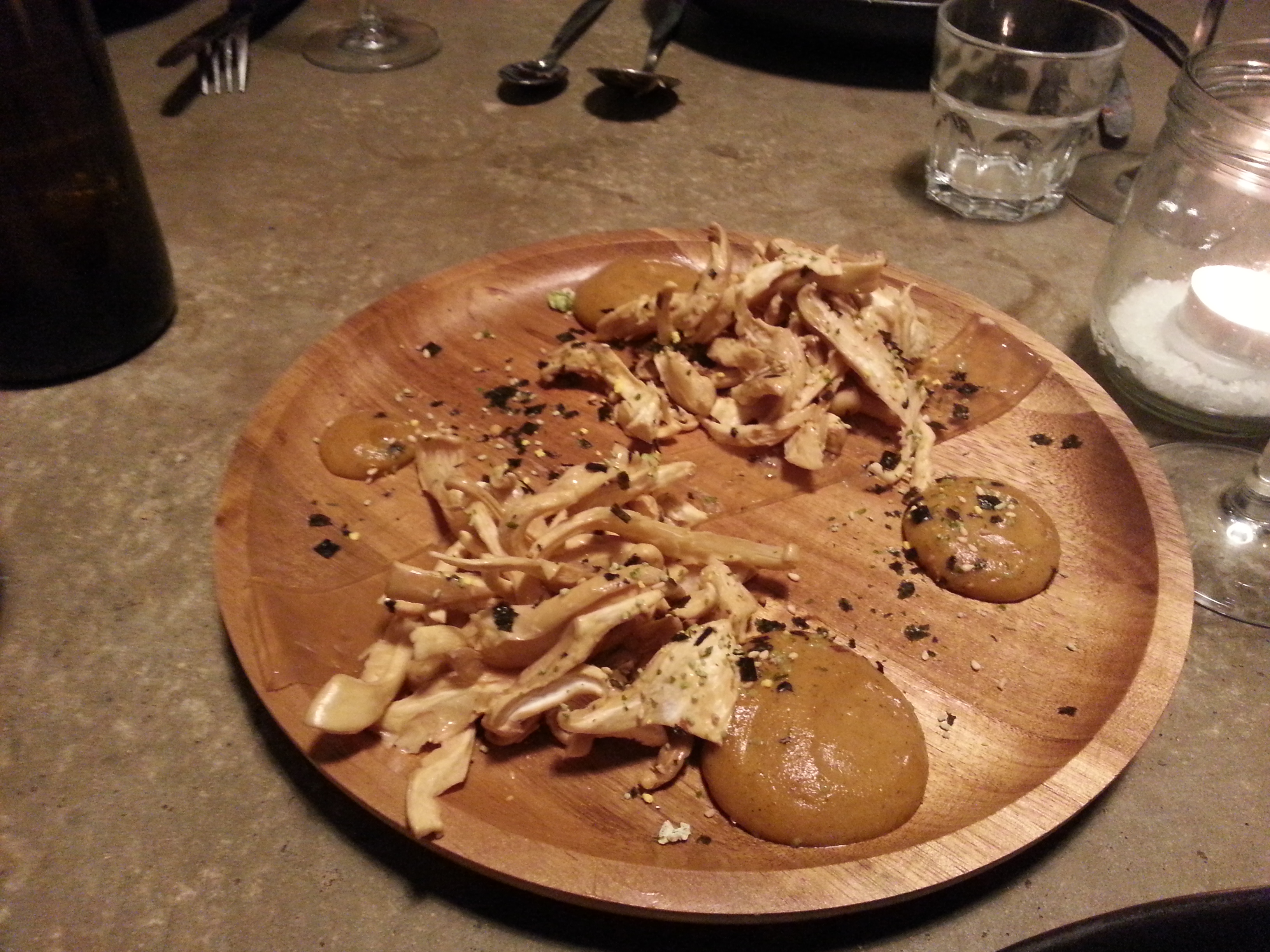 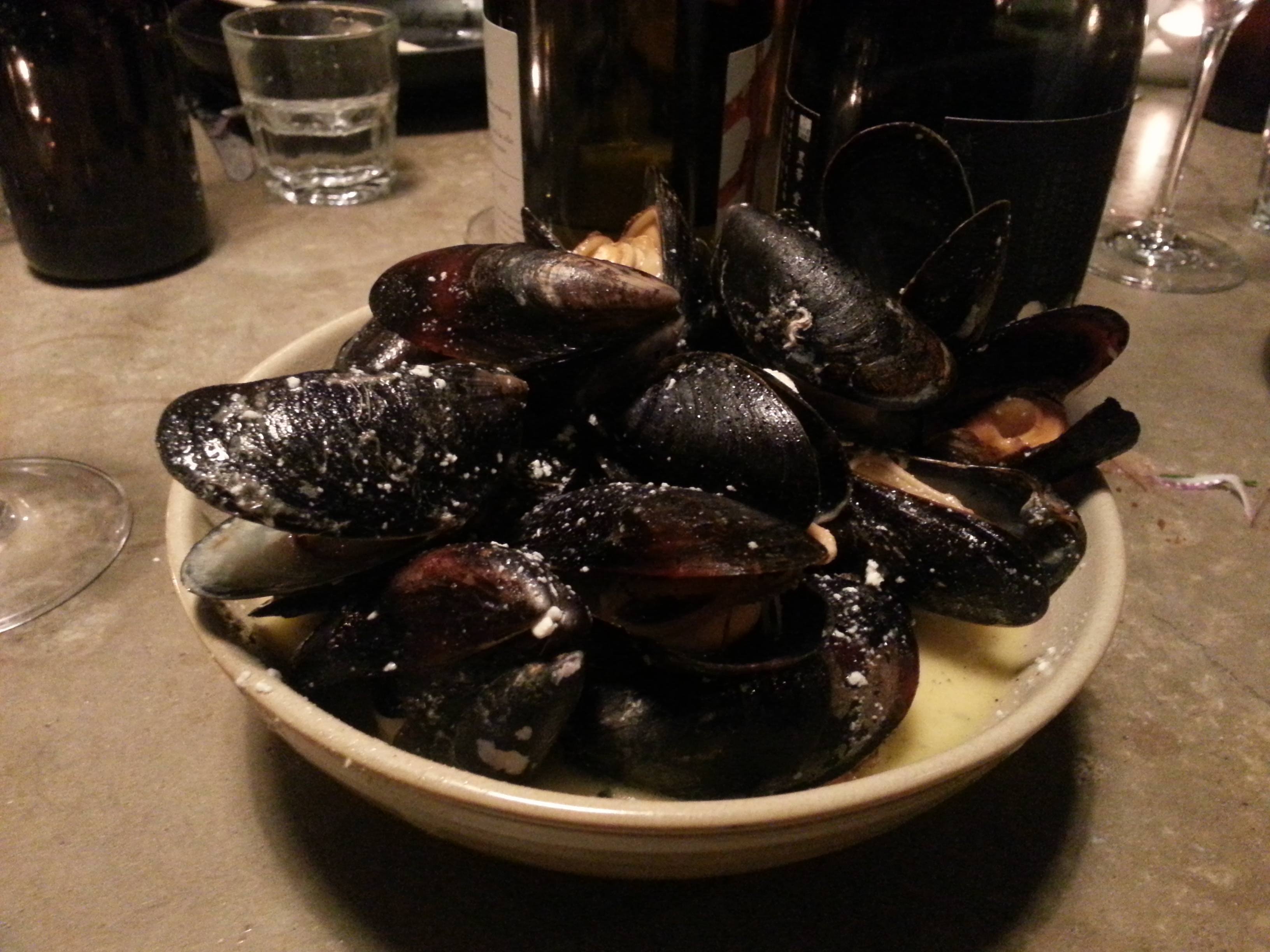 Skrei, Northeast arctic cod, with fermented rutabaga, or swede, and some of that apple-miso. You find skrei on a lot of menus these days. A nice meaty piece of fish, that was perfectly cooked.
Served next, coal oven roasted aubergine with aka miso sauce was a smokey and savory bite. 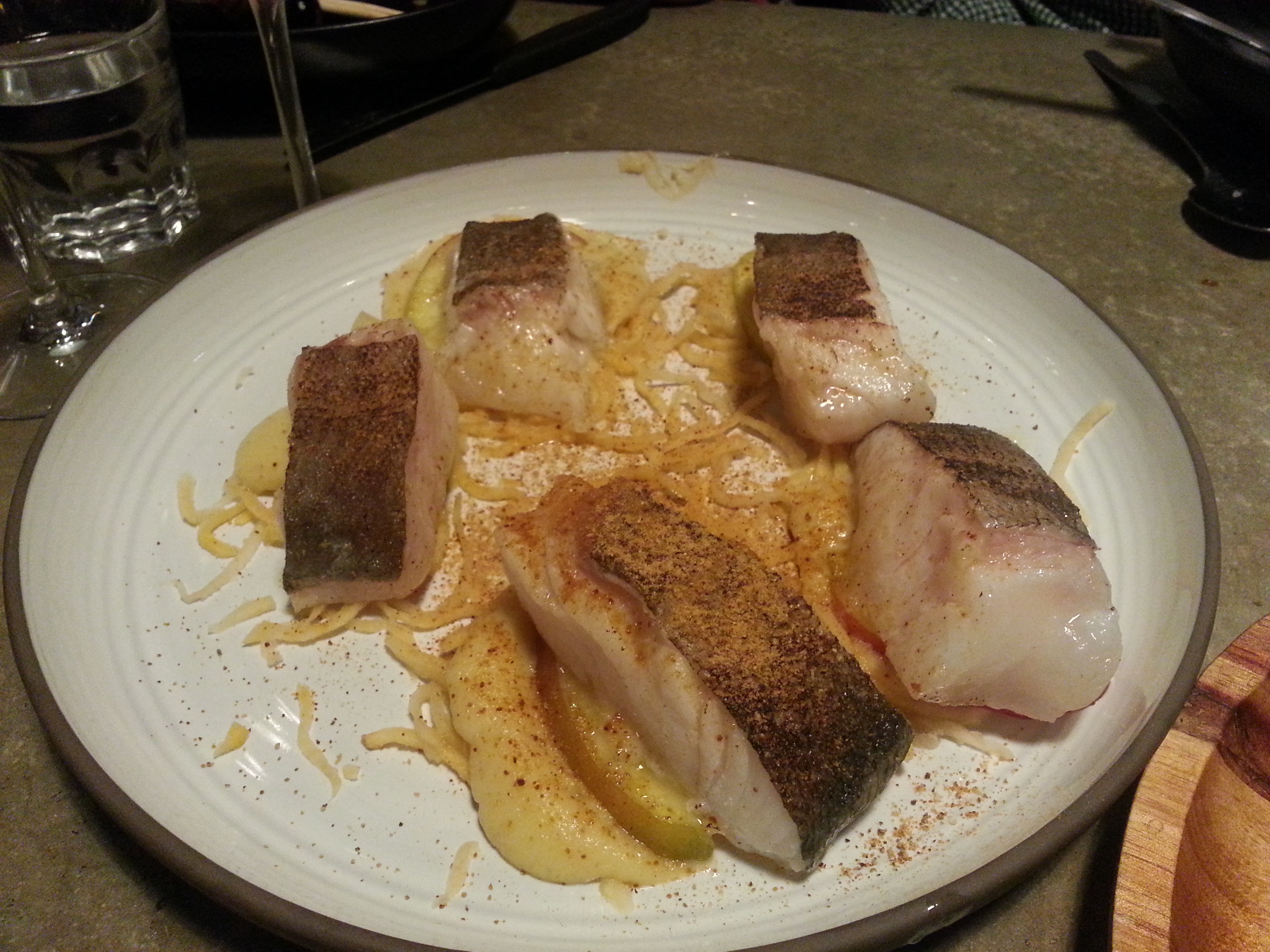 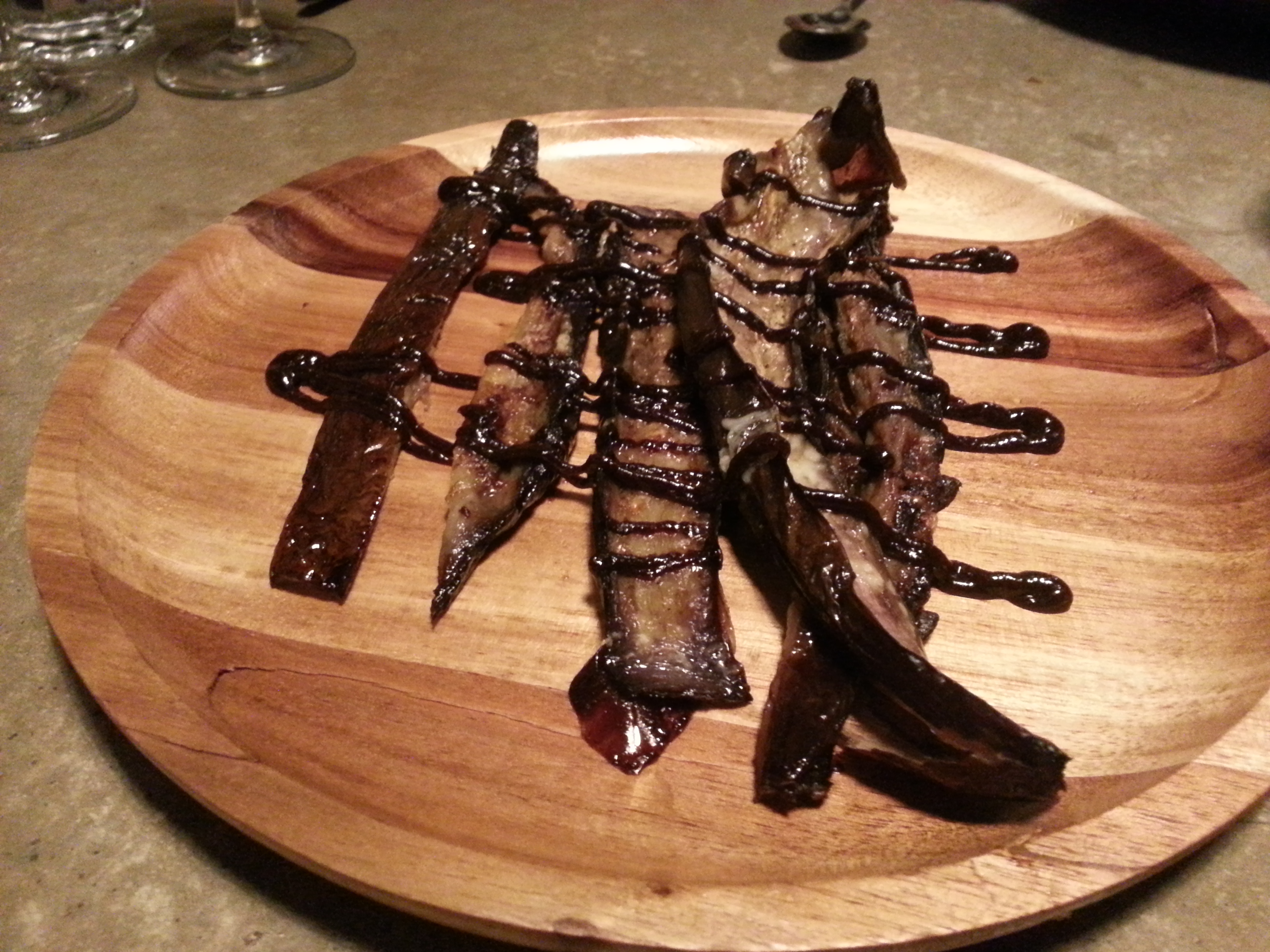 Oxheart cabbage cooked in sake topped with katsuobushi, dried bonito flakes. I really loved this one. So simple but packed with flavor. The cabbage was still crunchy, and the smokey, salty katsuobushi paired perfectly.
Next to that, brussels sprouts in kimchi butter. The sprouts were slightly overcooked for my liking, but the nuttiness of the sprouts still worked really well with the savory sour kimchi butter. 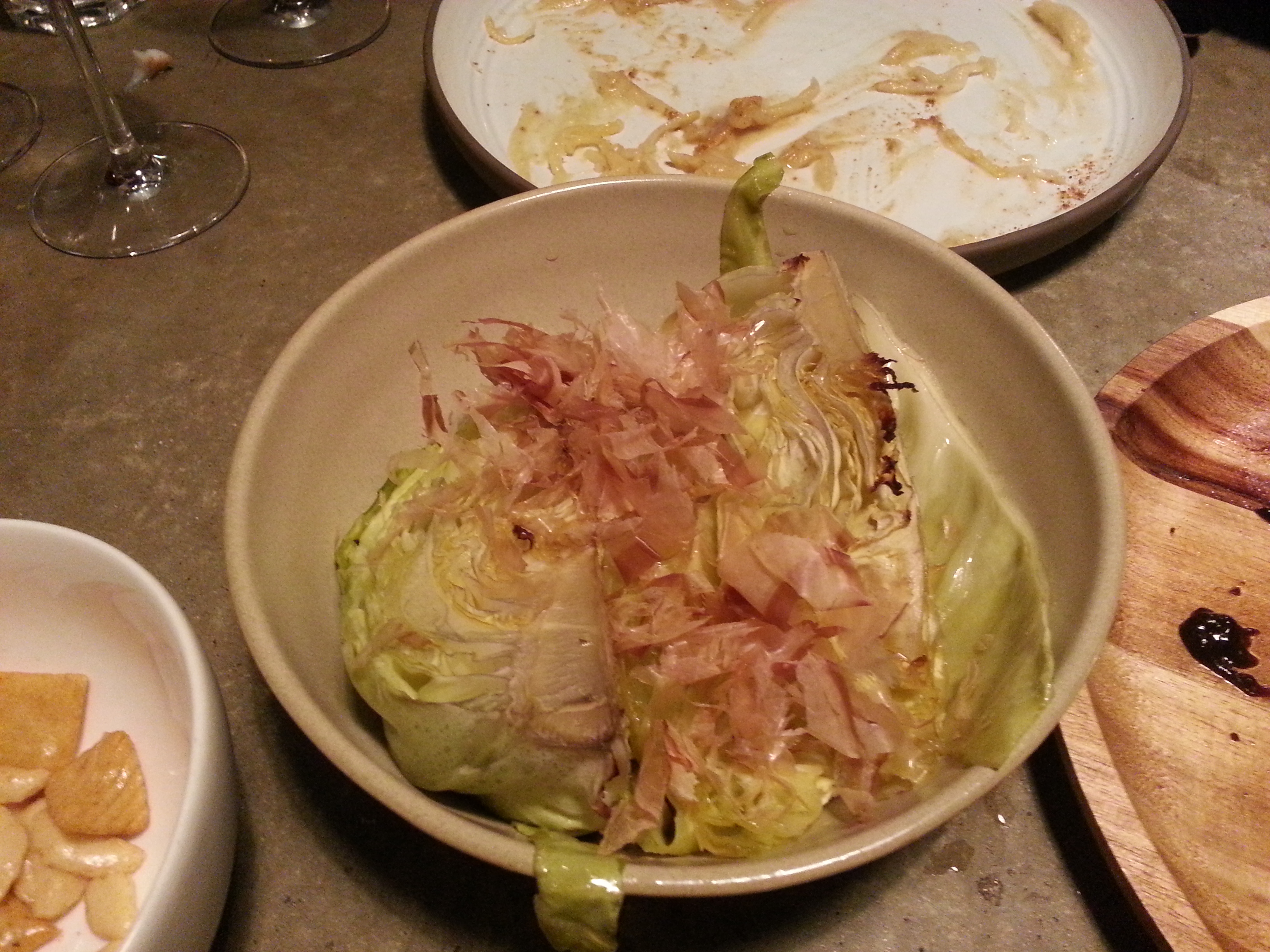 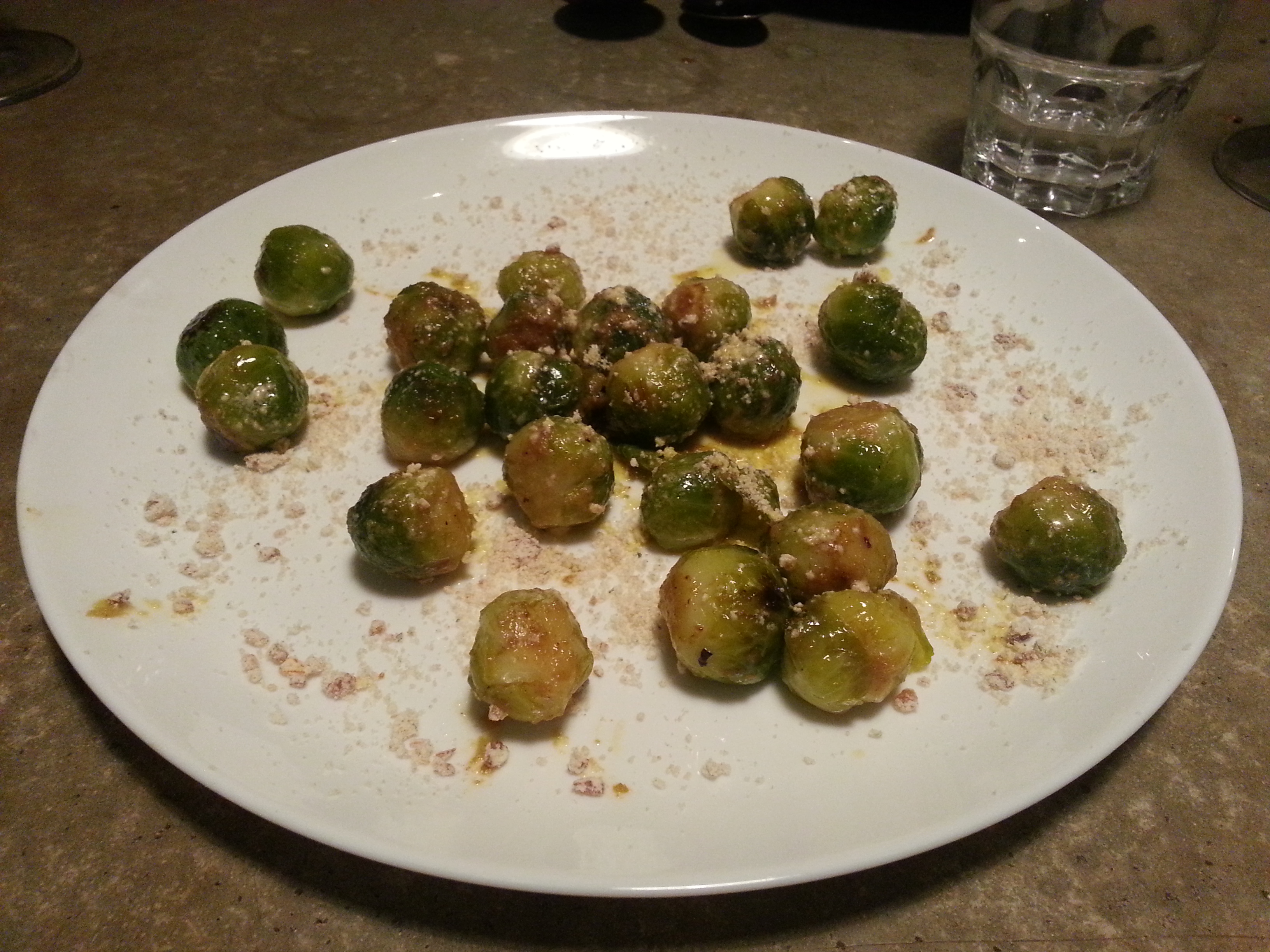 Of course, there must be tempura right? Right! Shiitake and squash tempura, mustard sauce. Well executed tempura, though squash tempura is not my favorite.
Next, duck confit with foie gras tofu, fig, and hoisin sauce. The duck confit was nice, as was the tofu, but I can’t say that I really tasted the foie in the tofu. 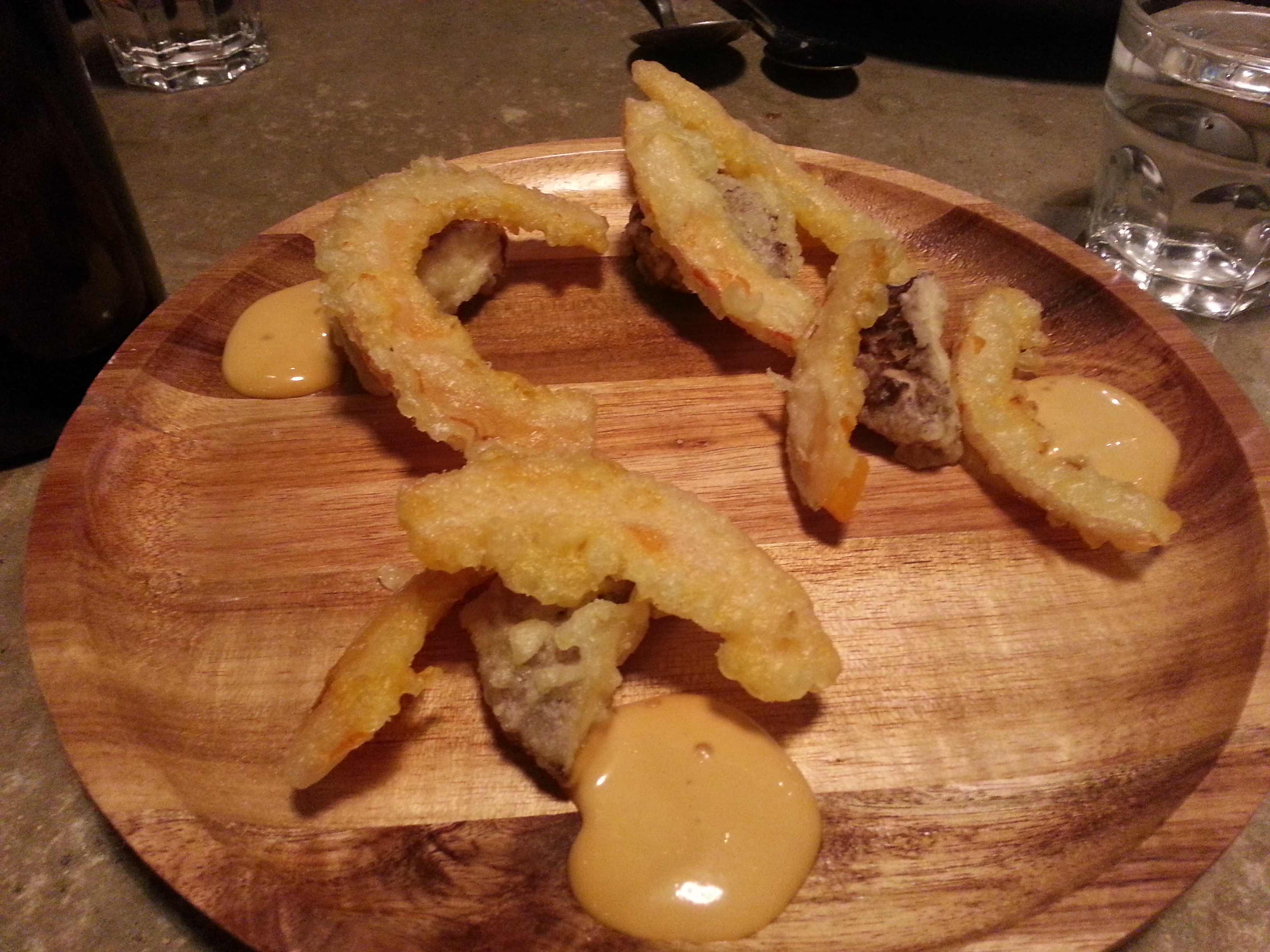 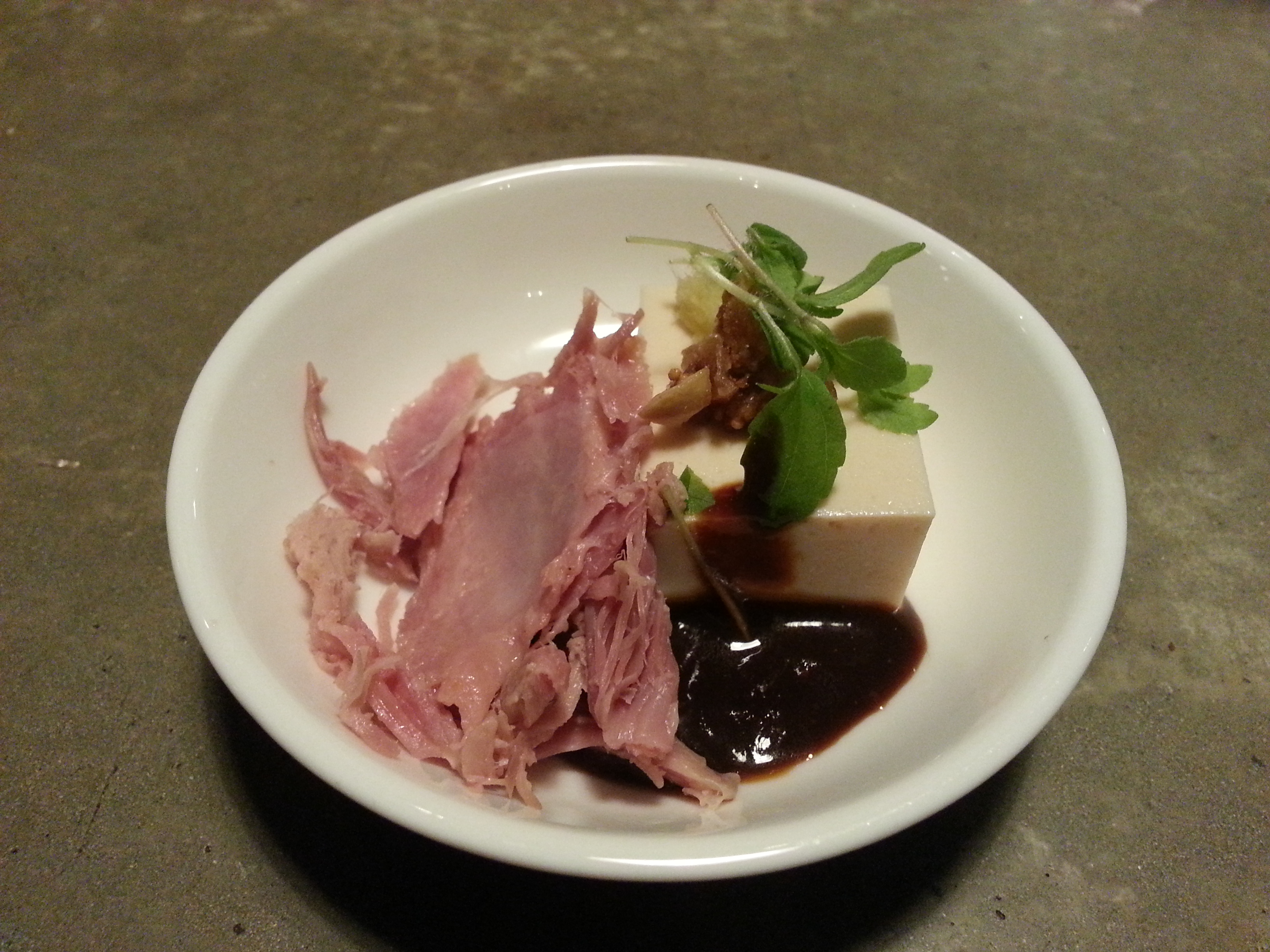 Then came the coal oven roasted Wagyu sucade, or flat iron steak, with purple carrot, in ginger sauce. This was the dish of the night. Melt in your mouth action going on. It was really good.
To finish off this epic dinner, dessert. Chocolate cardamom, and matcha ice cream with a fried white chocolate crumb. 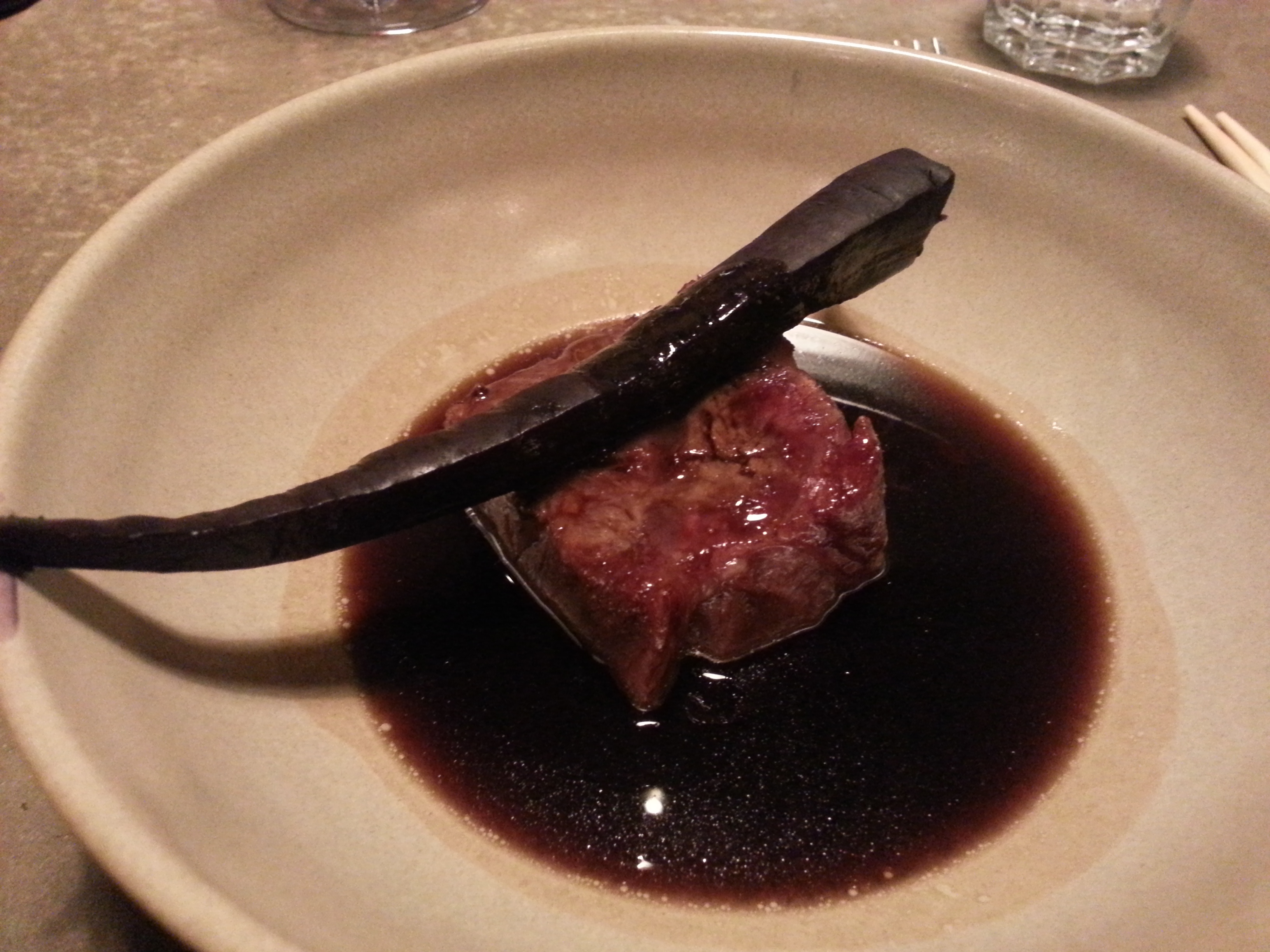 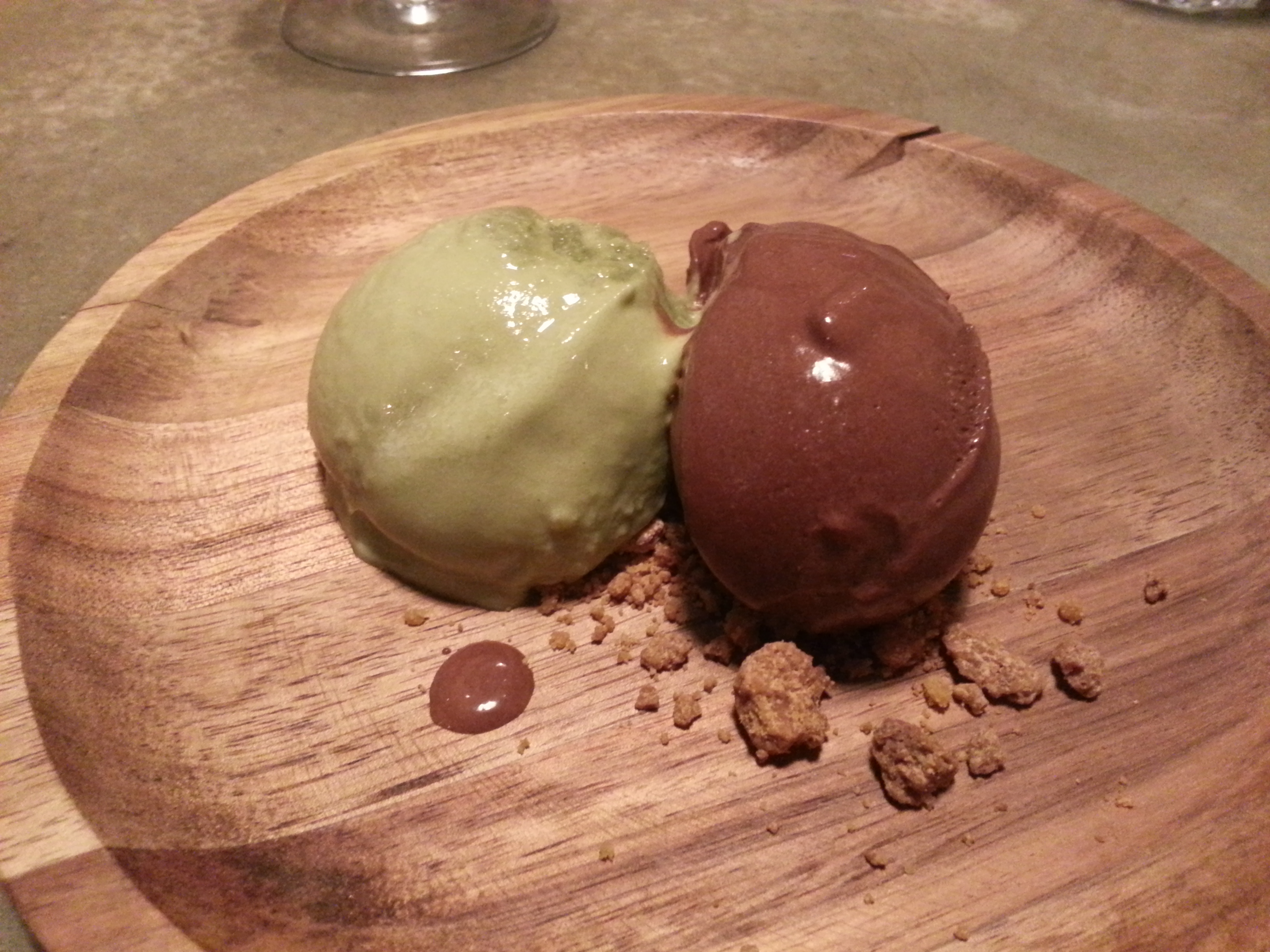 So yeah, what a feast! We had twenty or so dishes in a four hour span, all of which were expertly executed and well thought out. The event was a huge success, and because so many people missed out on it, they decided to do an additional night, which was held yesterday. Dertien and Japanese cuisine Yama are, by themselves, great restaurants to eat at in Rotterdam, but when they come together their cooking styles compliment each other to create a fusion that is really special. It’s safe to say that the next time Dertien and Yama hook up, you’ll find me there.